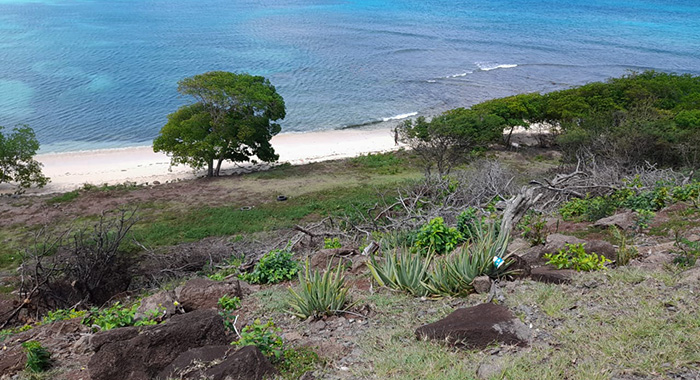 Parts of the lands at Union Island that are the subject of the latest acquisition. (Photo: F. Hutchinson)

The recent acquisition of ancestral lands belonging to the beneficiaries of Witcliff Hutchinson and others at Union Island (Government Gazette, Oct. 18 and 25, 2022) raises enormous red flags at the rate at which land acquisitions have been taking place by the Gonsalves administration. The use of the term “public purpose” by the government as justification to take a person’s land to facilitate handing it over to a third party to a develop yet another for-profit “feel-good” tourism project is not only outrageous, it is unconstitutional, overreaches the provisions and intensions of the Land Acquisition Act and is an abuse of power by the ruling regime.

Over the past 20 years, there has been a series of acquisitions by the government, that is taking the shape of state sponsored land-grabbing. Among the casualties are:

Not all of the intended acquisitions were successful, among those were: the Tobago Cays Marine Park takeover for the benefit of Robert Barrett and Palm Island Resort Limited (2004); the Cross Country Road, which was intended to link North Windward and North Leeward communities but also to open up virgin lands in the north of St. Vincent (2004); the proposed approval for sale of the islands of Balliceaux and Battawaya for a very grandiose tourism development plan by foreign investors (2008); A proposed commercial water project in Layou involving the former Governor General, in respect of Layou’s water supply, known as the Big Gut Water Project; the application to the Department of Planning by La Vue Resort at Villa Point to control parts of the beach and sea bed at Indian Bay Beach and to expand their operations into the sea (2021); and the latest application by a mining operation in Layou to build a third jetty at Jackson Bay to facilitate the removal of aggregate that was strenuously rejected by the local community.

Land Grabbing Defined
In 2011, over 150 representatives comprised of civil society organisations, social movements, international agencies, grass roots organisations and governments from over 45 African, Asian, North American, Latin American and European Nations met in Tirana, Albaniafor an international conference. The purpose of the meeting was to discuss securing land access for the poor in times of intensified resource competition for land, water, forests, biodiversity and other natural resources in the context in which land and resources are increasingly concentrated in the hands of a few.

Land Grabbing defined by the Tirana Declaration (2011) is:

“Acquisitions or concessions that are one or more of the following:
(i) in violation of human rights, particularly the equal rights of women;
(ii) not based on free, prior and informed consent of the affected land users;
(iii) not based on thorough assessment, or are in disregard of social, economic and environmental impacts, including the way they are gendered;
(iv) not based on transparent contracts that specify clear and binding commitments about activities, employment and benefits sharing; and,
(v) not based on effective democratic planning, independent oversight and meaningful participation.” (International Land Coalition, 2011).

The ‘Public Purpose’ Discourse in Tourism Related Land Acquisitions
The use of the “public purpose” discourse by the government to justify the acquisition of land to facilitate tourism development is a contradiction of terms, and not representative of what actually happens. While it may sound well-meaning and progressive, the benefits derived from tourism are reaped mainly by the government, and the economic elites who are mostly foreign investors, banking institutions, transnational hotel chains, private equity firms and other actors seeking investment opportunities. Government incentives to encourage these types of developments tend to include generous tax concessions in various forms, while the bulk of the responsibility for the tax burden is expected to be borne by the local population. Top jobs in foreign owned establishments are usually reserved for non-locals, while the menial jobs are expected to be taken up by locals in return for starvation wages. Meanwhile, local tourism and other entrepreneurs are not afforded equal business concessions and other opportunities that are willingly offered up to foreign and sometimes dubious investors. Adding insult to injury, the bulk of the purchases by these establishments are in the form of foreign imports, including agricultural products that are otherwise locally produced.

These types of tourism developments also restrict locals access to life sustaining resources such as water, near shore fisheries and access to beaches and other natural spaces for recreational purposes that is vital to the health and wellbeing of local communities. Studies have shown that in some places, one hotel room can consume as much as 16 times more water than a single household, on account of the vast amounts of water used to service golf courses, well-manicured grounds, swimming pools, catering and the like. Pollution generated by tourism establishments also impacts very negatively on the natural environment and ecosystem services, which in turn deprives communities of life sustaining resources derived from this. Some tourism establishments can even deprive other locally owned entities from engaging in tourism related and other economic activities simply by exclusion.

A major bonus derived from many of these tourism establishments facilitated by the government are the generous contributions to political campaigns that keep governments in power in a symbiotic relationship that continues to reward the investors with all the incentives they need to reap huge profits at the expense of the local population.

Legal Implications
While it is accepted that governments do reserve the right to acquire land for a public purpose by way of the Land Acquisition Act, this is usually associated with development projects that are generally intended to benefit the communities they serve, such as schools, roads and other infrastructural development. However, where the law is used to dispossess people of their legal land titles so as to facilitate tourism development by deploying nebulous claims that it is serving a public purpose is misleading, dishonest, unethical, and clearly an abuse of power. The substance of this is what is driving inequalities, landlessness and poverty. It is a gross violation of human rights that has long been refuted by tourism watchdog organisations and other international human rights organisations, including the United Nations.

To deprive a person their right to own and enjoy their land is to deprive that person of their constitutional rights in a very real sense. In the case of Randolph Toussaint, the East Caribbean Supreme Court ruled in 2015 that the government’s acquisition was “unconstitutional and unlawful, and null and void …and a contravention of the fundamental right to enjoyment of property guaranteed in Section 6(1) and Section 6(2) of the Constitution”. A Privy Council ruling in this same matter related to statements by the Prime Minister in the House of Parliament, pertaining to the acquisition, agreed with Toussaint’s argument that the acquisition was politically-motivated and prejudicial and denied Gonsalves parliamentary immunity on the basis of these arguments as a consequence. As in the case of Randolph Toussaint and Marcus De Freitas and others, sadly, too many of these types of cases tend to drag through the courts for far too long, and restoring the land to its rightful owners is usually not a part of that equation. THIS MUST BE STOPPED!!!