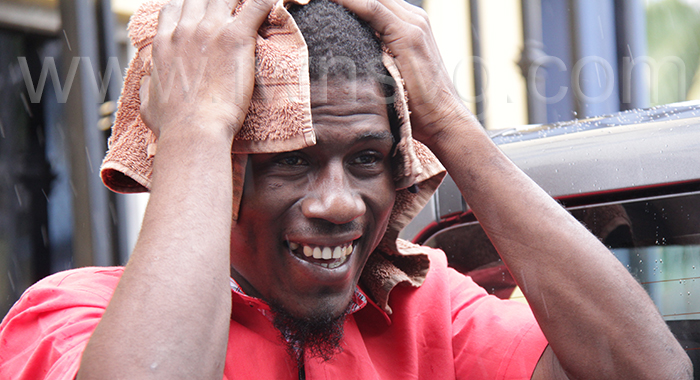 Ormando Mofford outside the Serious Offences Court on Friday, Dec. 2, 2022.

A man on firearm and ammunition charges, on Friday, handed over to police three additional firearms, including an SLR rifle, after the prosecution promised to ask the court to reduce his sentence by six months if he did so.

The man, Ormando Mofford, 27, of Glen, was initially arraigned on charges that on July 4, 2022, at Kingstown, he had in his possession one 9mm semi automatic pistol and 10 rounds of 9mm ammunition without a licence issued under the Firearms Act.

A third charge was that without lawful excuse, he had in possession offensive weapons, to wit one pair of scissors and one metal letter opener.

At his arraignment in July, Mofford pleaded not guilty to the charges and his bail condition included a curfew, which he broke, resulting in him being arrested and brought back to court last week.

When Mofford appeared before Chief Magistrate Rechanne Browne at the Serious Offences Court, on Tuesday, his lawyer, Grant Connell told the court that his client was willing to aid in the surrender of a firearm.

Prosecutor Station Sergeant of Police Renrick Cato offered an amnesty for any firearms handed over and promised that if Mofford handed over three or more firearms, he would ask the court to reduce by six months any sentence it imposes for firearm and ammunition seized in July.

Inspector Nolan “Grandpa” Dallaway of the Rapid Response Unit and his team recovered the firearms from Mofford.

When the matter resumed on Friday, Cato told the court that three weapons were handed over to the police.

Sergeant of Police, Julian Cain, an armourer, weapon and ammunition specialist and gazette ballistic expert examined the firearms and found them to be functioning.

“These firearms are sometimes used by snipers. As scope can also be attached to this firearm,” Cain said.

He said the 9mm pistols each has a maximum effective range of 50 metre.

“As an experienced officer, how would you express getting a weapon of that calibre?”

“Very fortunate to have a firearm of this calibre off the street,” Cain said.

Connell said that the surrender of the weapons was “a manifestation of what proper policing and community efforts can achieve”.

He praised Dallaway and his team for recovering the weapons.

He said that based on his calculation, a reduction of one third, for the guilty plea, would result in a sentence of 2.4 years for Mofford.

The lawyer asked that the court consider a further reduction in light of the capacity of the firearms.

“I can only imagine what would have happened were that on the streets. So he has saved possible bloodshed,” the lawyer said.

Connell showed a document to the prosecutor and the court but did not disclose the content.

He said the document gives Mofford “an opportunity to turn around and not exposed himself to the unfortunate situation that brought him to court”.

He said that Mofford’s assistance in retrieving the firearms speaks of “his intention to walk the straight and narrow.

The lawyer said Mofford’s parents both left  St. Vincent years ago and they are in a position to assist financially “even at this late stage in his life to bring him a little closer to them so the guidance that may not have been given at an early stage can be given now.

“We cannot underestimate the effect it has when parents don’t play their role in the early years,” he said.

The Chief magistrate said that is a point she had made earlier, adding that because Mofford’s parents played no role in his life “that is why he is here”.

Connell said: “but it is never too late for redemption and well are all but spiritual beings having a human experience.”

In his submission, Cato noted that the offence goes back to Carnival Tuesday.

“A national festival, Carnival Tuesday and the defendant was in town, thousands of people, with a firearm on his person.”

The prosecutor said that having said that, Mofford has pleaded guilty. He further noted the promise he had made to Mofford.

“The extra one that I am seeing here today is one I was not expecting to see: an SLR,” Cato said, but told the court that he would stand by his word.”

In handing down her sentence, the chief magistrate explained the sentencing guidelines and their application to the case.

In exploding the features of the offence, Browne said it was not lost on the court that the firearm was very well concealed .

“We know where it was found. In the depth of your crutch,” she said.

Browne said the fact that it was  9:45 p.m. on Carnival Tuesday on a crowded street was extremely aggravating.

“People are there to have a good time, not to hear gunshot ring out,” she said and spoke of the other paraphernalia found on Mofford, including a bag, red T-shirt, ski mask, and letter opener.

She said there were no mitigating features of the offence as outlined by the guidelines, but the court considered that he handed over three additional weapons.

Aggravating for Mofford as an offender was the fact that he has previous conviction, though not of a similar nature. Mitigating was that he has dependents.

“Though you are all over the place, I don’t know how well you are taking care of these dependents,” Browne said.

She said the court cannot over reiterate his cooperation with the authorities.

After applying the relevant discount, the court arrived at a sentence of one years and two months in prison for the firearm, which was further reduced by 47 days, representing the time spent on remand.

Mofford was sentenced to eight months for the10 round of ammunition and six months on the offensive weapon charge, both to run concurrent to the sentence for the ammunition.

“You are still quite young. These offences normally go three years upward, five years upward. Your sentence is quite reduced and it started on the lower end of the scale,” Browne told Mofford.

She said that after completing his sentence Mofford would still be under 30 years old.

“I have every confidence in you. Not because you have that history that I saw and know and other people may know, prove people wrong; don’t prove them right,” the chief magistrate said.

She informed Mofford of his right to appeal and ordered that the firearms be confiscated.