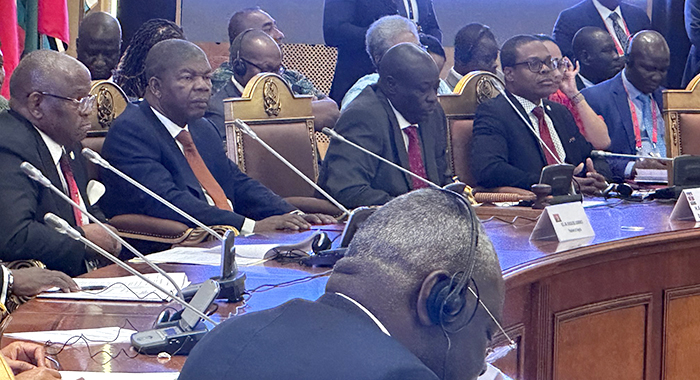 Caribbean delegates at the opening of the OACPS Summit in Angola. (Photo: Twitter/@PressACP)

LUANDA, Angola (CMC) – Bahamas Prime Minister Phillip Davis Friday said that the negative impacts of climate change on the region become ever more apparent each year, as leaders of the Organisation of African, Caribbean and Pacific States (OACPS) began their 10th Summits with its two archipelagic regions flagging climate change among the major challenges.

“We are one of the regions which is most vulnerable to rising sea levels. Extreme weather events, especially hurricanes, which are more frequent and upgraded intensity, pose an existential threat to many of our low lying states,” Davis told the opening ceremony of the two day meeting.

“It is a self-evident truth both for the OACPs in general, and our region in particular, that many of the challenges and opportunities we face are common to each other,” Davis said, speaking on behalf of the Caribbean Forum (CARIFORUM), the grouping of the 15-member Caribbean Community (CARICOM) and the Dominican Republic.

He said the CARIFORUM is proud of the roles its member states played at the 2022 United Nations Climate Change Conference (COP27) and in the years preceding the talks, which resulted in COP27 ending with a historic deal on the establishment of a global fund for loss and damage.

“We are fully resolved to continue to do what they can to ensure that the polluters who must pay under that deal actually finally honour their long standing commitments.”

Meanwhile, speaking on behalf of the Pacific, the Samoa Prime Minister, Fiamē Naomi Mataʻafa said that for her region, climate change remains “the single greatest threat to our security, prosperity and way of life”.

“We must collectively demand all countries, especially the big emitters, to make rapid, deep and sustained reductions in emissions to keep the 1.5 degree goal alive,” the Samoan leader said.

Caribbean and Pacific SIDS have said that staining global temperature rise to below 1.5 degrees Celsius above pre-industrialisation is essential to stave off the most devastating impact of climate change, including sea level rise.

“For us in the Pacific, if we are not on track to meet the 1.5 degree goal, much of our development efforts will continue to be reversed. The window to secure a liveable future for us is closing faster than for everyone else,” Mataʻafa said.

She told OACPS leaders that a united stance in the global arena through implementation of relevant decisions is key.

She mentioned the support by the OACPS of the Pacific Islands Forum leaders’ declaration on preserving maritime zones in the face of climate change-related sea level rise.

“This is a priority for the Pacific and with 64 OACPS members who are also coastal states, we must catalyse the initiative to work collectively to build wider international support, including through adoption of similar practices to create a global norm for preserving maritime zones,”Mataʻafa said.

She said the Pacific welcome an OACPS leaders commitment to adopt the United Nations General Assembly resolution for an advisory opinion from the International Court of Justice on climate change.

“Again, this demonstrates the value, uniqueness and potential of the OACPS to become a powerful and united political bloc in various multilateral processes and settings. This will need to be assessed and explored within the context of the revised Georgetown Agreement as will be the need to secure other strategic partnerships for our sustainable development.”

The two-day summit is being held under the theme “Three Continents, Three Oceans, a Common Destiny: Let’s build a Resilient and Sustainable OACPS”.

It is expected to firm up the new partnership agreement between the OACPS and the European Union for ratification by next June in Samoa.