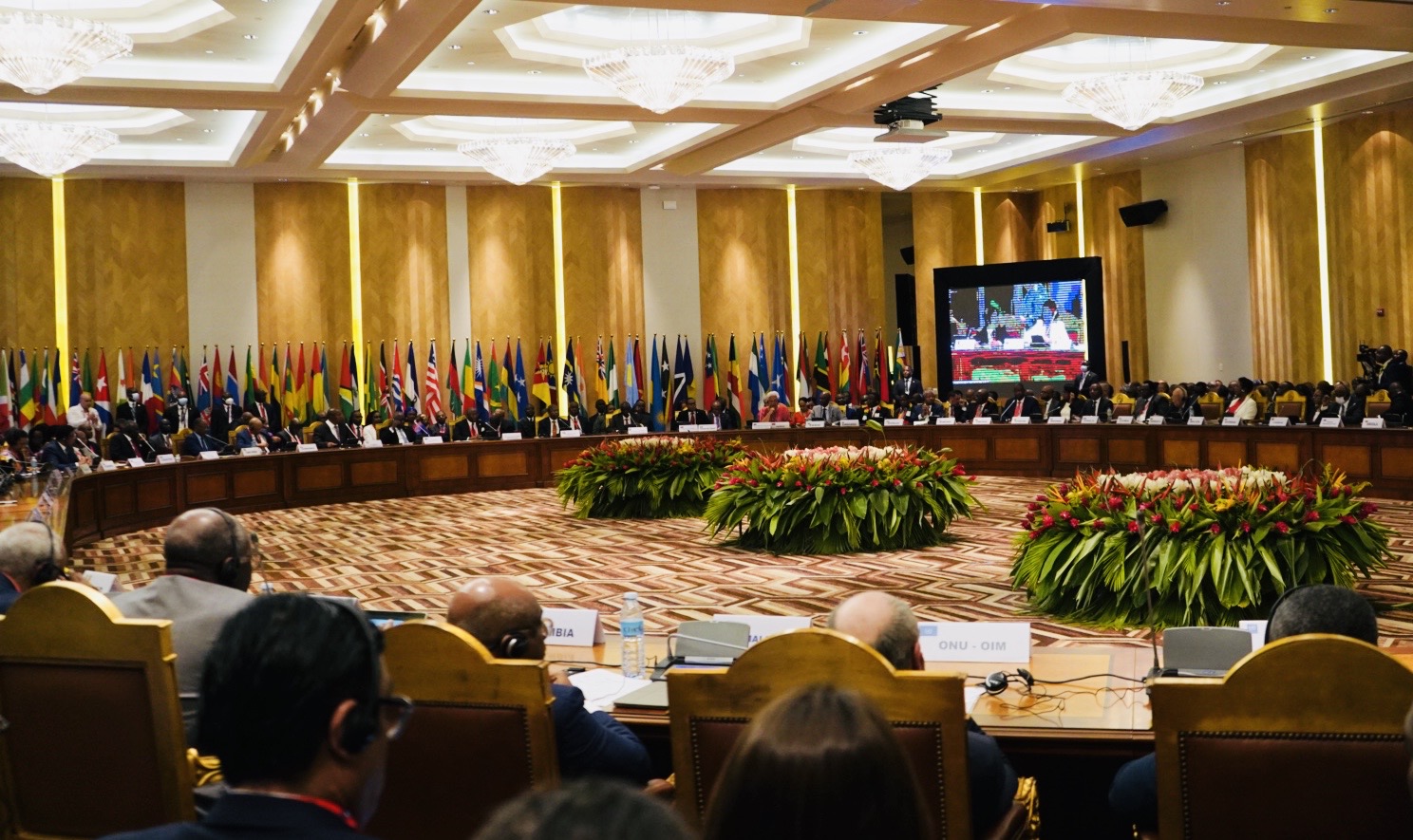 LUANDA, Angola (CMC) – The 10th Summit of Heads of States and Government of the Organisation of African, Caribbean and Pacific States (OACPS) opened here on Friday with its Secretary General, Georges Chikoti, calling on the group to act jointly to raise issues of concern to member states.

Chikoti said the coronavirus (COVID-19) pandemic had negatively impacted the health, economy and livelihoods with the 79-member group and deepened poverty and inequality.

“The disastrous effects of climate change such as droughts, flooding, fires, and extreme heat, constitute further threats to our existence, not to mention the diverse devastating effects of loss of biodiversity on our ecosystems and economies,” Chikoti told the opening ceremony.

He spoke of increased protectionism, supply side problems, the diminished role of global institutions, geopolitical shifts and alignments, technological rivalry and reduced foreign investment as issues of concern to the OACPS.

Chikoti also said the energy, food and financial crisis are all taking place against a backdrop of conflict such as the war in Ukraine and in other regions closer to OACPS regions.

“Now is the time for the OACPS to act jointly to improve our solidarity and strengthen our unity to raise our concerns and to become a fierce advocate for strengthen multilateralism,” he told delegates and guests of the meeting, including its developmental partners as well as regional and international organisations.

“Now is, indeed, the time for the OACPS to take its place within the global entities to play a role as a valued and trusted partner,” Chikoti said, noting also that the OECPS should continue to argue for reform of the United Nations and its agencies, multilateral institutions, and international organisations, such as the World Trade Organization (WTO).

“Those efforts must be strengthened to ensure that these organisations become more efficient, inclusive and representative of an equitable world order.”

He said the global financial architecture needs to be overhauled as well to ensure simplified access to grants and aid resources that are fit for climate action and to build our resilience and to ensure sustainability.

“As we strive to build sustainability and resilience, we count on the shared moral authority we hold based on ambitious and decisive leadership on climate,” he said, noting that the 2023 United Nations Climate Change Conference (COP 28) will mark a turning point for the first global stocktaking following the Paris Agreement on responding to the devastating impacts of global temperature rise.

“Parties from the developed world should be held accountable by limiting temperature rise to 1.5 degrees by the end of the century, by injecting funds into the new loss and damage fund, delivering US$100 billion which is outstanding by 2023 by doubling adaptation, finance and stepping up support to development efforts as well as technology transfer.”

Small island developing states, (SIDS) including those in the Caribbean and the Pacific have said that staining global temperature rise to below 1.5 degrees Celsius above pre-industrialisation is essential to stave off the most devastating impact of climate change, including sea level rise.

Chikoti said the quest to achieve the 2030 Sustainable Development Goals (SDGs), must be an effort to implement the Paris agreement on climate change.

“Therefore the OACPS should mobilise internal resources in partnership with our development partners, working to eradicate extreme poverty in our countries,” Chikoti said, adding it is the duty of the OACPS to prevent conflicts and settle such conflicts wherever and whenever they occur in order to promote peace and security as well as international stability.

The Secretary General said the OACPS should pursue efforts for internal strengthened cooperation to achieve diversified partnerships through South-South cooperation and triangular cooperation.

“As such, the theme of this 10th summit is certainly appropriate,” he said.

The meeting is being held under the theme “Three Continents, Three Oceans, a Common Destiny: Let’s build a Resilient and Sustainable OACPS,” and Chikoti said it is focused on the need to build an OACPS that is resilient, sustainable, based on building economies that are knowledge-based and through science and technology.

“Indeed, we are reminded that in a world in which major scientific and technological changes are ever more rapid and which is also marked by emerging crises, research and innovation are acknowledged to be vital drivers of development that are both sustainable and inclusive.”

He said research and innovation are, therefore, “a source of potential to further make tangible the goals of sustainable development”.

The theme of the summit also calls for optimal leadership and action in order to tackle global challenges. It comes days before the International Conference on Biodiversity COP15, in Montreal, Canada, and Chikoti said the meeting will also “broach the global biodiversity crisis”.

He said the summit will hold a session “bringing together partners …so as to capitalise on opportunities for strategic partnerships in a rapidly evolving world.

“We will also cover a number of important issues such as energy and food security, infrastructure, economic diversification, climate change, peace and security,” he said.

Chikoti said the parties to the new OACPS-EU agreement “reaffirmed their commitment to equally participate both at international level in support of common interests whereas they would still be mindful of the need to preserve and maintain multilateralism.

“Together, the countries of Africa the Caribbean and Pacific were able to achieve much over the last 48 years — 79 countries three regions all under the same banner of unity and solidarity.”

Chikoti said that the number 79 is constant , as Maldives is joining the OACPS even as South Africa has withdrawn its membership.

“The OACPS is, to date, the largest formal structured organisation of independent states covering three continents.

“A 10th summit is a moment to allow us to reaffirm our commitment to building an OACPS that is equipped to implement sustainable development goals for a common destiny on behalf of the three continents, three oceans which our countries hold.

And, in your declaration as the close of the summit, we will, through that declaration, be guided so that we may navigate a difficult world. However, we will benefit from your wisdom,” ,” Chikoti said.