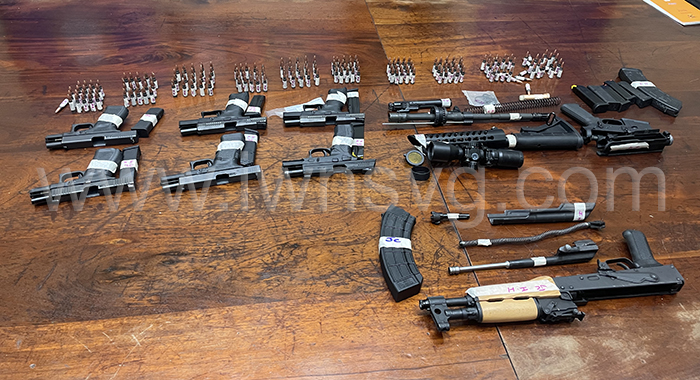 The firearms and ammunition on display at the police press conference in Kingstown on Friday, Dec. 16, 2022.

One person has been arrested after police launched an investigation into the importation of six 9mm pistols, two high-power rifles and  200 rounds of 7.62 ammunition into St. Vincent and the Grenadines.

The weapons and ammunition were intercepted at the Customs Department in Kingstown, on Thursday.

Commissioner of Police Colin John told a press conference in Kingstown on Friday that the weapons and ammunition were imported into the country and represent the largest single haul of guns and ammunition intercepted by local authorities.

John could not say how soon the investigation would  be completed and charges proffered.

“I cannot say at the moment because we do not know the scope of the investigation. We want to follow our leads and from there we will determine how long the investigation would take,” he said.

The police chief said that the firearms “seem brand new …

“We are very much happy,” he said of the intercept. “We know one of these bullets could have killed more than one person, based on the velocity of these bullets and these guns. So I am really happy that we were able to intercept these firearms.”

He said the seizure was a  collaborative effort between the Royal St. Vincent and the Grenadines Police Force (RSVGPF) and the Customs Department.

He thanked the members of the Customs Department for their vigilance, cooperation and assistance in law enforcement in helping to reduce crime in SVG.

“We have seen in the last couple of months and the last few days, I would say, the apparent use of firearms to commit some very serious offences. We have to, as best as possible, try to reduce the number of firearms in St. Vincent and the Grenadines and arrest perpetrators. So this, indeed, is a good effort on behalf of the RSVGPF,” John said.

The police chief was speaking during a week in which two persons were shot and killed and a further two shot and injured, taking the homicide count to 39, one shy of the record.

He commended officers from the Narcotic Unit who undertook the operation that recovered the firearms.

“I just went to thank all the players, the parties who participated in the operation,” John said.

He asked the media to understand that the matter is likely to end up in court, adding that he would only answer questions if he thought it prudent to do so.

One of the weapons is a Draco, a semi-automatic pistol which is relatively small and can be consoled “without very much effort,” John said.

The police chief said the other rifle is an apache that was broken down into component parts when it was shipped to SVG.

He said the haul included additional magazines for the rifles and the handguns as well as a scope for one of the weapons.

The police chief said that the person who was arrested is a suspect in the case.

“He is currently a suspect. We are conducting investigations,” John said, adding that because the weapons were imported into the country, regional and international bodies are being conducted to carry out further investigations.

The police chief did not disclose exactly where the firearms were found.

“… That’s touching on the evidence and I was not there personally so I was just speaking from what was reported to me and that is of evidential value so I would not want to comment on that aspect of it,” said John, a former deputy director of public prosecutions.

He said the ammunition were armour-piercing rounds like the types used in the M16 rifle and are powerful enough to go through a bulletproof vest.

The police chief said he had an idea of the maximum effective range of the weapons “but I would not want to give inaccurate information.

“So I would rather stay in my lane in that regard.”

An officer who was present at the press conference said that the rifles have a maximum effective range of over 1,000 feet feet and pistols of 50 metres.

John urged the public to continue to assist the police in their crime-fighting efforts.