Veron Primus gets 34 years for murder 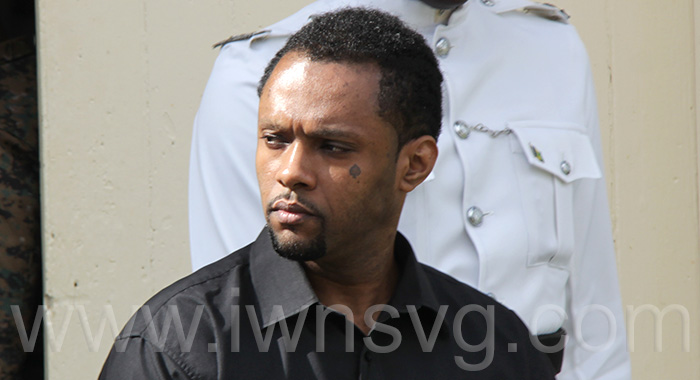 Veron Primus has appealed his murder conviction and 34-year prison sentence. He is seen here being escorted to prison after his sentencing on Dec. 16, 2022.

Veron Primus, 35, who is wanted in the United States for murder, was on Friday jailed in St. Vincent for 34 years for the November 2015 murder of real estate agent, Sharleen Greaves, 33.

He had spent four years, four months and 26 days on remand for the offence and when this was deducted, Primus was left with a term of 29 years, seven months and four days from Friday.

He was convicted on July 18, 2022 but his sentencing only took place on Friday because of a number of issues, including the fact that his lawyer, Michael Wyllie, was overseas for health reasons.

He said the court is expected to follow the sentencing guidelines — which aim to promote consistency and predictability — unless doing so leads to injustice in any particular case.

The judge said that in arriving at a sentence for Primus, he saw no reason to depart from the guidelines.

He pointed out that an adult convicted of murder can be sentence to death, a whole life sentence or a determinate sentence.

Where an offender is found to be insane or suffering a relevant mental disorder, the court can order detainment at the court’s pleasure.

Justice Cottle noted that the Crown did not seek the death penalty for Primus, adding that the prosecution had acted “quite rightly” in this regard as the murder, as bad as it was, does not rank among the worst of the worst.

He said that the guidelines say that where an offender takes a bladed weapon to the scene intending to use it to commit any offence and uses the weapon to commit murder, the appropriate starting point should be 30 years imprisonment, within a range of 20 to 40 years.

Justice Cottle said he was content to adopt the suggested starting point.

The judge then considered the aggravating and mitigating features of offences and the offender.

He said the murder occurred at the victim’s workplace at night and she was particularly vulnerable as she was isolated in the building after regular working hours.

It was an unprovoked attack in which Greaves received at least 11 wounds and must have suffered before her death.

Justice Cottle said he saw no mitigating features of the offence.

Aggravating of the offender is that he has two previous convictions in the United States — one for a stolen vehicle and another for violating a court order not to come within 20 feet of a woman who was an ex-girlfriend.

Further, he has two previous convictions in SVG for escaping lawful custody while on remand for Greaves’ murder.

The judge said Primus argued that the two previous convictions in SVG should not count as aggravating features so as to increase the sentence for the present offence. His reasoning was that this would introduce a sense of double jeopardy because he had already been punished for all of the offences.

“I do not agree,” Justice Cottle said, adding that he counts them as aggravating in the sense that Primus’ previous behaviour offers an insight into his attitude towards the law.

The judge said that in the United States, Primus knew of and violated the court order then argued that the victim had come to his house.

He denied abducting her, as alleged.

The judge noted that in mitigation, Primus’ lawyer, Michael Wyllie said that Primus opted to escape prison twice while on remand because he was dissatisfied that he was denied bail on the murder charge.

“Evidently, he felt that his incarceration was unjustified and he was entitled to be at liberty. So, he took matters into his own hands,” Justice Cottle commented.

The judge found no mitigating features of the offender.

The judge concluded that the aggravating features outweighed the mitigating ones and, therefore, increased the sentence by four years, bringing it to 34 years imprisonment.

There was no discount for an early guilty plea.

The judge said the victim impact statement from Greaves’ mother brought home the point that murder causes the death of the victim but also has immense consequences on those left to mourn.

“In her golden years, this mother is bereft of the financial and emotional support her daughter used to provide.”

Justice Cottle said the psychological effect of the sudden loss of a child in horrific circumstance left Greaves’ mother struggling and in need of counselling, which she cannot now afford to pay to access.

The judge that sadly, the court could “only offer a measure of closure to this tragic chapter” of Greaves’ mother’s life.

The facts of the case, as presented by Justice Cottle are:

Greaves, a real estate profession, was brutally murdered at her office at Arnos Vale on the night of Nov. 12, 2015.

Her body, which bore numerous stab wounds, was found in the office the following morning.

Primus was one of Greaves’ acquaintances. On the night of the murder, he left Campden Park, where he was living with a female cousin with whom he shared an intimate relationship.

He took a bag containing hunting knives and other items and returned later that night.

His cousin noted an odour that she said was similar to that of blood and also noticed what appeared to be blood on the knives.

Primus was in an emotional state and cried and his cousin consoled him as best as she could.

The next morning, he took her to Kingstown in a vehicle later identified as Greaves’.

After Greaves’ death, her vehicle was found abandoned in Kingstown and there was no key found in it.

Police launched an investigation, which stalled for some time.

In the meantime, in January 2016, Primus’ cousin visited him at his home in Vermont.

There, he showed her a photo of Greaves on his tablet computer and he confessed to his cousin that he had killed Greaves.

She asked him why and he said he did not know why.

Primus’ cousin did not report the confession to police until April 2016.

She said she was afraid of Primus and needed time to carefully consider what she wanted to do.

After receiving the report, the police executed a search warrant at Primus’ home, where they found two hunting knives belonging to him and a key to Greaves’ vehicle.

He said the key was for a rented vehicle that he had used but had not returned one of the two keys to the hirers.

Police checked with the hirer who produced his record, which did not show any rental of a vehicle to Primus at any time.

Primus denied involvement in Greaves’ death, saying her secretary had rented the vehicle to him on the night of Nov. 12, 2015.

He said that the secretary rented Greaves’ vehicle to him whenever Greaves was overseas.

Primus said that when he was about to return the vehicle on the morning of Nov. 13, 2015, Greaves’ secretary called him saying that Greaves had been found dead.

Primus was told nothing about the circumstances surrounding Greaves’ death but said he did not want to get involved in the matter and, therefore, abandoned the vehicle and kept the key.

At the trial, Greaves’ secretary testified, saying she did not rent the vehicle to Primus.

The jury, made up of seven women and five men, rejected Primus’ account and returned a unanimous verdict of guilty.

3 replies on “Veron Primus gets 34 years for murder”