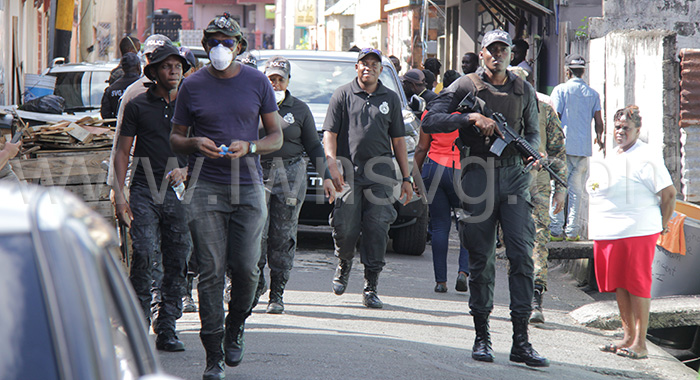 Police officers during an operation in Paul’s Avenue on Nov. 17, 2022. Prime Minister Ralph Gonsalves has called for greater police presence between Stubbs and Rillan Hill.

Opposition Leader Godwin Friday has presented a “better way” to address crime and violence in St. Vincent and the Grenadines, saying that the country does not have to accept the current situation.

“However, the present government does not have the will, the moral authority, nor the competence to tackle the problem. They lack ideas and, therefore, lack solutions,” he said in a national address on crime last week.

Friday spoke hours before SVG would record another shooting death, taking the number of homicides this year to 39, just one shy of the record created in 2016.

“There is a better, more hopeful alternative that will improve life for our people and make SVG a beacon of good governance,” Friday said, adding that his New Democratic Party has called for “effective means to fight crime, not merely with words but with a clear plan to action, which we will implement as soon as we replace this failed government.

“To be effective, we must understand what gives rise to crime, then develop strategies and programs to address the problem,” the opposition leader said.

He called for the implementation of a number of measures, chief of which is focusing on crime prevention.

“Remember, an ounce of prevention is still better than a pound of cure,” he said, adding that the country should, therefore, invest heavily, upfront, in crime prevention.

“In this regard, the programmes outlined in the NDP’s Spiritual and Social Redemption Charter should be implemented. The Charter promotes positive community-oriented programmes that would steer vulnerable young people away from crime towards socially positive behaviour.”

Friday said the country must restore trust and confidence in the police and the criminal justice system.

“Trust in the system now is shaken and broken. Political connections should not shield anyone involved in a shooting, theft, domestic violence or other crimes from proper investigation and prosecution,” Friday said.

“Justice must be equal for all. This will help everyone and will help the police in their work and their lives. They and their families are members of society and like the rest of us are equally vulnerable to crime and violence.”

He said the police cannot solve crime by themselves.

“They need the community to provide information during investigations and to be witnesses in criminal cases. We can promote this by implementing and pursuing community policing.”

He said that specific training in community policing, the police would engage in trust-building activities in communities.

The opposition leader said regular meetings between the police and community members should be introduced so that they would work together to prevent and solve crimes.

“The police must see their mission as serving and protecting people and be keen to embrace the community in so doing.”

He also called for an increase in the presence and visibility of police in streets and communities, adding, “not in a hostile manner but to assure people that they are there to protect them”.

“There continues to be an outcry in our country about the ineffectiveness of our criminal justice system that too often fails to impose appropriate penalties to deter offenders.”

He spoke of the case earlier this year in which a man was jailed for four years for indecent assault of a 4-year-old girl.

“The public was outraged by this light sentence and called for stiffer penalties in such cases.  We totally agree with that call,” Friday said.

“Creating an effective and well-resourced criminal justice system involves the police, the Director of Public Prosecutions, the courts … and the prison system. It is vital that these components are appropriately equipped and that they function professionally and independently.”

He said this also involves reviewing and revising the criminal laws to provide greater sentencing options for magistrates and judges.

The opposition leader called for the introduction of measures that would improve access to justice; for an increase in the number of magistrates; expanding the High Court and improving its facilities; and upgrading forensic laboratory services to expedite investigation and prosecution of offences and thereby eliminate the backlog of criminal cases.

“The system must also provide support for victims of crimes such as rape, sexual assault, and domestic violence to help them recover and be able to resume their lives as best they can.”

He said the country must promote rehabilitation of offenders.

“Fighting crime is not only about punishing offenders; it must also involve rehabilitation. Offenders should be provided with programmes that would help to keep them from reoffending and becoming a perpetual menace to society. In this regard, we should establish a Young Persons Rehabilitation Centre for non-violent young offenders. This will prevent many young offenders from becoming hardened criminals, lost to a life of crime.”

Focusing on rehabilitation is not coddling criminals, as some might say, Friday said. He said that on the contrary, it is “effective crime fighting that protects all of us.  Rehabilitation has been proven to work and is cost-effective”.

He called for the re-introduce of the Police Cadet Service to provide young people with an avenue for entering the police force.

Friday said the police force must be professionalised and modernised.

“To achieve the best outcomes in crime fighting, the best officers must be recognised, supported, and rewarded. This includes reviewing remuneration and promotion practices for the police, including the Auxiliary Police, and ensuring that they are done, not as political favours, but on merit. Fairness is key to success.”

He further said that modern police stations should be constructed in suitable locations.

“These new stations and existing ones must be equipped with the basic tools for fighting crime, notably reliable transportation and modern communication and crime fighting technologies. Extensive and ongoing training of police and prison officers is needed in areas such as information technology and investigation techniques.”

He said there must also be specialisation of service where necessary.

“For example, a separate Fire Service with substations in various parts of the country should be established. This will create career opportunities for officers and improve firefighting,” Friday said.

He said another example of specialisation required is in combating tourism-related crimes that are so damaging to the economy.

“A special service to investigate and prosecute such crimes, including against yacht visitors, is urgently needed because they require a quick response and measures to keep victims properly informed about their cases even after they leave our shores,” the opposition leader said.