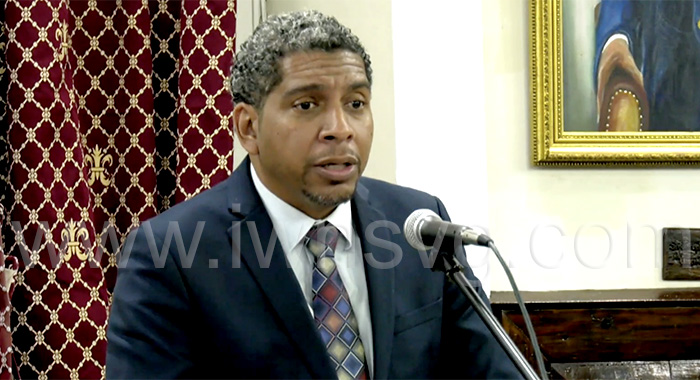 Minister of Finance, Camillo Gonsalves presents the Estimates on Dec. 14, 2022.

The EC$1.44 billion budget that Minister of Finance, Camillo Gonsalves will present to Parliament for approval on Jan. 9, 2023 will contain 115 additional posts relative to Budget 2022.

He told Parliament while presenting the Estimates of Revenue and Expenditure last week that 16 positions have been created under the Ministry of Education and National Reconciliation.

Of those, half are required to staff the new Petit Bordel Technical Institute, the minister said, adding that four positions are needed for the staffing of the early childhood centres in Sandy Bay and Chateaubelair.

The final four positions are to provide staff for the Canouan secondary school, which opened in 2018 and has now reached Form 5 level.

Five posts have been created within the Ministry of Health and the Environment, include three in hospital’s services to provide support at the Chateaubelair Smart Hospital, Levi Latham Health Complex and the Modern Medical Complex.

The other two, which are under Community Health Services, are dental assistants for Kingstown and Union Island.

The finance minister said 65 positions have been created within the Ministry of National Security.

The majority of these — 52 constables — has been added to the workforce of the police service to assist in increasing the levels of public security and safety.

Five positions have been allocated to the Coast Guard Service to enhance their ability to patrol the nation’s waters.

This is to enhance further NEMO’s human resource capacity as they seek to improve the operation of the seismic network to ensure better monitoring of La Soufriere and Kick ’em Jenny volcanoes.

The Passport and Immigration Department has been allocated two new posts to enhance data gathering capabilities in the Grenadines.

Two new positions have been added to the Policy Planning and Administration Programme of the Ministry of Planning, while Maritime Administration will benefit from the addition of one new post.

Prisons will see the addition of two posts to bolster their ability to provide medical care to inmates of His Majesty’s Prisons.

The Ministry of Tourism has been allocated five positions, four of which are under the new Civil Aviation Department mainly to fulfill regulatory obligations with respect to Eastern Caribbean Civil Aviation Authority, and the International Civil Aviation Organization.

The other post is a Director of Tourism under Tourism Administration to strengthen the ministry’s strategy and policy formulation capabilities.

The Ministry of Urban Development has been granted a project officer 1 and a procurement officer, “chiefly to build up their project implementation capacity.

“And this is a theme that will be repeated throughout the debate on the Appropriation Bill — that of individual ministries implementation capacity,” Gonsalves said.

The Energy Unit also received a new post of director.

The Minister of Agriculture has five new positions of agriculture instructor and three driver/office attendant positions under the Agriculture Extension and Advisory Services and Policy Planning Administration, respectively.

“This is for more outreach and contact between the ministry and the farmers and fishers nationally,” Gonsalves said.

“A deputy director for beneficiary management has been added to the Public Assistance Unit,” Gonsalves said.

He said that administration of the Housing and Informal Settlement Programme has been strengthened with the addition of a permanent secretary and two clerks.

Two inspectors have been added under the Community Development and Cooperatives Programme and under Gender Development, one additional consular position was created.

He said that the ministry was created before the coronavirus (COVID-19) pandemic and the April 2021 eruption of La Soufriere.

He said a permanent secretary and administrative assistant have been added to the Office of the Prime Minister to provide further administrative support to the office, and a new post of chief technical officer has been created under the Post-Secondary and Higher Education Programme.

The Ministry of Public Service Consumer Affairs and Sports has been allocated an additional six sports coaches under the Division of Physical Education and Sports and an administrative assistant under the Employee Assistance Programme.

The estimates were approved even as the opposition complained, for yet another year, that the capital budget is bloated by Other Receipts, which, at EC$225.9 million dollars, represents 30% of the capital budget.