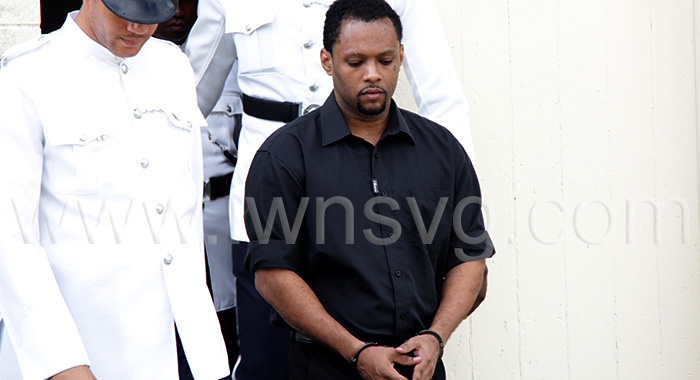 Murderer Veron Primus on his way to prison on Friday, Dec. 16, 2022 to continue his 34-year sentence.

The office of the Director of Public Prosecution has discussed with prison authorities the matter of ensuring that murderer Veron Primus does not escape a third time.

Primus, 35, escaped from His Majesty’s Prisons twice in just over a year between 2019 and 2020 while awaiting trial for murder.

On the first occasion, he escaped alone and turned himself in a day later and on the second, he escaped along with another murder accused, who police shot and injured during their apprehension.

Primus had been on remand at the prison since his arrest and charge in April 2016.

On Friday, High Court judge Justice Brian Cottle sentenced him to 34 years in prison for the November 2015 murder of Greaves, a 33-year-old real estate agent.

After the sentencing on Friday, iWitness News noted to Assistant Director of Public Prosecutor Karim Nelson, who presented the Crown’s case against Primus, that he has escaped prison twice while awaiting trial.

“The office of the DPP has been in conversation with the Superintendent of Prisons in relation to that matter,” Nelson told iWitness News.

The prosecutor said he was happy that the case is now over.

“I feel relieved that it is over, because at certain points in the trial I thought we may have to stop the trial,” Nelson told iWitness News outside High Court No. 1, in Kingstown, where Justice Cottle handed down the sentence.

“And it’s always a difficult thing for witnesses, having given evidence. I am glad we are at the end and justice has been served,” said Nelson, whose team included Kaylia Toney, a Crown Counsel at the Office of the DPP.

“At the end of the day, all you want is that justice is served and I think that was done in this case.”

Primus has been indicted and is also wanted in the United States in connection with the 2006 murder of Chanel Petro-Nixon, 16, in Brooklyn, New York.

Nelson said U.S. authorities are in the process of seeking Primus’ extradition.

“We have been in communication with them,” he told iWitness News.