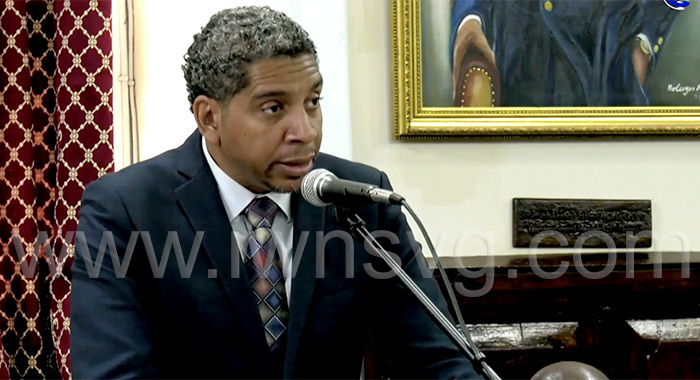 Minister of Finance Camillo Gonsalves speaking in Parliament on Dec. 14, 2022.

Vincentians will have to wait until around 2025 to find out how poverty has changed in St. Vincent and the Grenadines (SVG) since 2008, when it was 30.2%.

The government has decided to terminate the 2018 poverty assessment because, among other reasons, “incomplete, inaccurate and misleading figures were unofficially and prematurely circulated to the public in late 2020”.

This meant that poverty in the country was 0.1 percentage point higher than in 1998, the last assessment before the Unity Labour Party administration came to office in March 2001, according to data Cummings cited, which he said the government had refused to release for three years.

In Parliament last week, Cummings noted that the poverty assessment report of 2018 is long overdue.

what is the status of the assessment exercise; what is the expenditure to date on the exercise; and when would the report on the poverty assessment be made known to the public.

Gonsalves said that the 2018 Poverty assessment report is incomplete and the decision was made to terminate the process for the following reasons.

He said the premature circulation to the public of “incomplete, inaccurate and misleading figures” compromised the integrity of the ongoing assessment and its findings.

“Had the process continued and the published figures differed from those that were previously circulated unofficially, the government may have been accused of tampering with the data and the credibility of the Ministry of Finance and in particular, the Statistical Office would have been damaged,” Gonsalves said.

He further said there was considerable discrepancy between what was circulated and what was emerging internally in the data being collected.

“The dissemination of incomplete inaccurate and misleading data for apparently partisan political purposes also led to an analysis of the credibility of the data collected prior to and revisions to the ways in which data are collected, stored and analysed by professionals in the bureaucracy.”

He further said that the report was abandoned because the challenges to complete data collection surveys, interviews and analysis during the COVID pandemic and volcanic eruptions were insurmountable and would have presented the problem of merging pre-pandemic, pre-volcano data with information gathered in the immediate aftermath of those cataclysmic events.

The finance minister told Parliament that the socio-economic landscape of SVG has changed markedly since the bulk of the data collection commenced in 2018.

“As we are aware, the country has experienced the negative impacts of the pandemic and eruptions of the La Soufriere volcano. As such. indicators of poverty and vulnerability would have changed drastically and do not reflect the current realities on the ground.”

He said a new assessment is currently being planned.

“Undertaking the poverty assessment is a very important exercise, which is critical for evidence based-policies and programmes,” Gonsalves told Parliament.

“Hence, the government remains committed to conducting this assessment. The survey is a cross sectional study that analyses data from a population at a single point in time, it provides rates of poverty and vulnerability, identifies the determinants of poverty and describes features of the population.”

He said the assessment provides quantitative data on poverty and vulnerability.

The government signed a financing agreement with the World Bank on June 4th, 2022, for US$6 million to strengthen data collection and analysis in SVG. The World Bank has agreed to finance a survey of living conditions and has made available US$478,000 for this activity.

The finance minister said US$300,521 was spent on the 2018 poverty assessment at the point of its termination.

“While the process was incomplete, some of the information collected still provides useful baseline data that will inform the analysis of trends and patterns in future assessments and surveys,” he said.

He said the government agreed with the World Bank that a new poverty assessment will be conducted following completion of the population and Housing census.

He said the methodology of the 2025 Poverty assessment has not been confirmed and will be determined by the Organisation of Eastern Caribbean States (OECS) at the OECS level as part of the OECS Data for Decision Making project.

“It is to be decided whether the diary method from 2008 or the recall method from 2018 or a combination of both methods would be used for the collection of the data,” Gonsalves said.

He said the diary method was used in 2018, meaning participants in the survey kept a record of their spending over a particular period of time and then submitted those diaries for analysis.

In 2018, the recall method was used, in that people were asked to recall from memory their expenditure and income.

“… and there was some debate both within country and within the OECS more widely, and in the statistics community as to which methodology produces more accurate reflections of living conditions in our countries,” Gonsalves said.

“And at the OECS level, the determination will be made whether or not to go with the diary method, the recall method or some hybrid of the two. It is worth noting that survey questionnaires for national household surveys are harmonised at the level of the Organisation of Eastern Caribbean States,” he said.