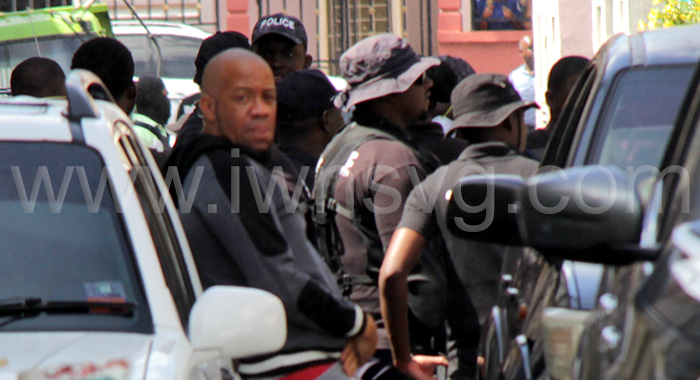 Jawansa “Sanga” Fraser looks on as police conduct an operation in Paul’s Avenue on Nov. 17, 2022. Fraser was shot and injured during a drive by shooting in the community Friday night.

Paul’s Avenue resident Jawansa “Sanga” Fraser, a farmer and businessman, survived an attempt on his life Friday night, when he was shot for a second time since 2017.

iWitness News was reliably informed that Fraser was grazed in the chest and another man shot in the right foot when they were attacked during a drive-by shooting in the Central Kingstown community, also known as Paul’s Lot.

The other injured man has been identified as Omo Wolly Simmons, of Paul’s Lot, originally of Ottley Hall.

Sources in the know told iWitness News that Simmons received serious injuries to the bones in his right foot, while Fraser was kept overnight for observation.

iWitness News was reliably informed that police recovered from the scene 9mm spent shells as well as ammunition of the type used in high powered rifles.

A vehicle parked in the area was also damaged during the shooting, which occurred sometime after 9 p.m.

On Oct. 14, 2017, Fraser was shot six times by the occupants of a vehicle, who opened fire on him while he was standing at the roadside near a sports bar in Paul’s Avenue between 11 a.m. and noon on Sunday.

Fraser received what he described as “six graze shots” in the attack, which took place between 11 a.m. and noon.

He sustained injuries to his left arm, hip, and neck and told iWitness News that one of his attackers had attempted to shoot him in the head, but the bullet grazed his neck instead.

Jomarno “Small Man” Tash, Colin “Cocoa” David and Ricardo “Shrek” McFee  were charged with attempted murder in connection with the shooting but were freed in April 2018 after Fraser failed to turn up to the preliminary inquiry for yet another time.