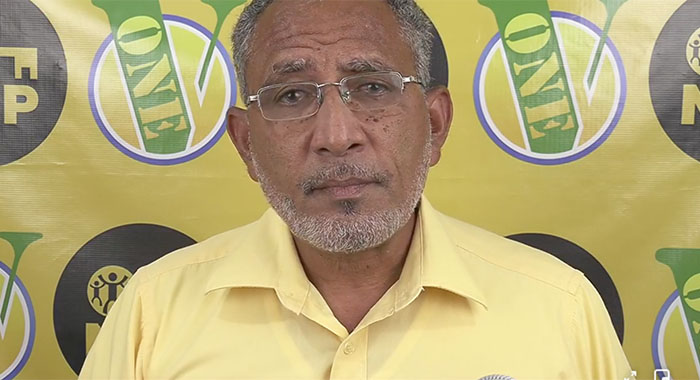 Addressing domestic violence, predial larceny and “low morale” among auxiliary police officers is pivotal to curbing crime in St. Vincent and the Grenadines.

“Domestic violence and sexual offences against women and girls are a plague in our country,” Opposition Leader Godwin Friday said in a recent national address on crime and violence.

He said that one case of domestic violence is one too many, adding that the current widespread nature of the problem is “a national disgrace”.

“It must be addressed urgently and seriously,” Friday said.

The opposition leader said these types of offences require sensitivity and specialised training to investigate and prosecute effectively.

“A domestic violence and sexual offences unit in the police service, staffed by specially trained officers and counsellors, is required for success in combatting such crimes.  Also, wherever possible prosecution must be pursued, even when the victims do not wish to proceed.”

“Agriculture is critical to our economy. But the stealing of farmers’ crops and animals is out of control and is destroying agriculture and farmers’ livelihoods,” Friday said.

He said there can be no tolerance for such crimes for though they don’t make headlines, they hurt farmers badly and do terrible damage to our economy.

“Combating praedial larceny requires more than just rural constables; it requires a comprehensive approach that involves tracking agricultural commodities and punishing offenders who are detected, including those who aid and abet thieves by buying the goods from them at cut rate prices.”

Friday said the upholder as well as the thief must be held accountable. “And we must be serious about that.”

He said the Auxiliary Police Force plays a pivotal role in assisting the regular police in their day-to-day duties and in providing security for ordinary people, especially children at school.

“We salute you for what you do. But we know that even after all your hard work, there are little or no benefits for you and this causes low morale,” Friday said.

He said his New Democratic Party believes that all auxiliaries, that is, traffic wardens, tourist police, and rural constables should be pensionable.

“That is fair and just. There must also be opportunities for training and promotion. Such measures would demonstrate respect for those workers and improve their morale and performance.”

He said that while the mission of the police is to serve and protect, they can only do so when they stay within the scope of the law.

“Acting in the name of the law does not give police licence to abuse crime suspects or other people. To stamp out such abuse, a civilian complaint commission should be established to receive complaints from civilians and also from fellow officers against police misconduct,” Friday said.

“This process will reduce police abuse. It will also promote better relations between police and the people and make policing more effective.”

He said it is no longer enough for the country to simply hope that things will improve with the passage of time or that the criminals will come to their senses and behave better.

“We must have a plan that will reduce crime and make us safe again. We know that rising crime is not a problem that will be solved overnight and that there is no single all-encompassing solution. Some measures can be implemented immediately with great effect (e.g., coastguard patrols to end yacht break-ins). Others must start now and take effect over time.”

Friday said the NDP is proposing that to address crime, the country should “introduce community policing”, strengthen the police service and justice system and rebuild trust in them, equip the police service with modern tools and procedures to defeat criminals and provide programmes for rehabilitation of offenders to help prevent them from re-offending.

He said that women and girls must be protected from sexual violence and domestic abuse with dedicated services; a fire service be established, separate from the police force, and

streamlined procedures and specialised units be set up to respond to tourism-related crimes, especially yacht break-ins, and praedial larceny.

“From all that I have said, it should be clear that combatting crime is not just for the police; it is everybody’s business. It requires us to work together at all levels to succeed. It requires hard work!  We can’t just throw up our hands in resignation as the government has done,” Friday said.

“We can effectively reduce crime and make our communities safe again. There is no doubt in my mind that we can do better. Indeed, with the problem of crime and violence, we have no choice: we must do better.   And with effective, proactive leadership, we will,” he said.