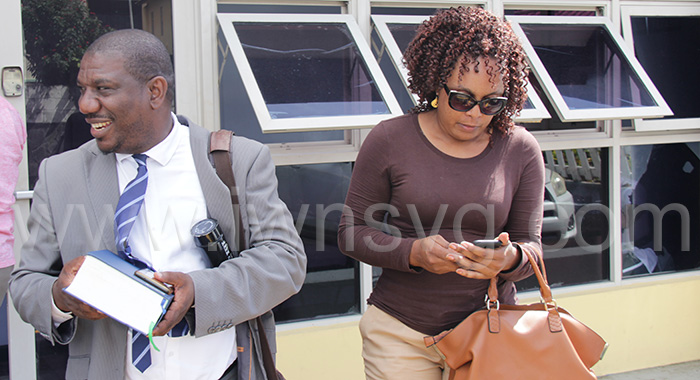 The chief accounting officer for the government of St. Vincent and the Grenadines has told the court that her department has no policy preventing anyone from collecting a cheque on behalf of another person.

Accountant General Debbie Antoine testified that a person who collects a cheque for a payment that might have been fraudulently entered into the system by that said person would not be violating any government policy in collecting that cheque, as long as the person presents the requisite documents for collection of the cheque.

The disclosure came as defence counsel Israel Bruce cross examined Antoine during the trial of Mitra-Ann Prescott, a junior clerk accused of stealing EC$154,300 from the government through an alleged tyre sale scam.

The prosecution, represented by Crown Counsel Rose-Ann Richardson, is alleging that Prescott committed the alleged crime by fraudulently entering information into SmartStream, the government’s payment system.

The allegation, as it has emerged at the trial, is that Prescott entered those payments in the names of Gary Garage, Gareth Sayers and Gareth Renson Sayers, then used fraudulent documents to collect the cheques at the Treasury Department.

During cross-examination, Antoine said she is the chief accounting officer for income and expenditure of the Government of SVG, and, as such, every department of government falls under her supervision as it relates to monies received and expended on behalf of the government.

She said that as the chief accounting officer, she has in place procedures that are to be followed to ensure proper accountability for state funds.

Antoine told the court that the SmartStream accounting system is used throughout the government, including at the Police Department, and different people perform different roles in SmartStream.

She said that on SmartStream, “enterers” enter basic information before a senior official begins to act on them.

If the police force needs tyres, for instance, the unit or the police station would have to make a request to Police Headquarters.

The head of the unit should sign off on the request and if this is not done, the request is not considered legitimate.

Antoine said that the request should not be sent to the Police Headquarters unless the requisite senior person signs off on it.

She said that when someone enters a purchase order on SmartStream, the system says who is logged in as the user when the entry is made.

The accountant general said that each person on the SmartStream system is given a certain number of letters as an ID, which are for convenience and not security.

Antoine said that the Treasury Department’s policy is not to assign passwords to temporary workers, unless the person is a temporary junior clerk on probation.

Each user who is entered on the system is assigned a password which is their responsibility to change when they log on.

Antoine said she is not aware that temporary workers access SmartStream and if that is done, the account through which the access was gained is blocked.

She said she was not aware that temporary workers at the Police Headquarters were accessing SmartStream.

“I have had situations where people called and I got the impression that they were able to do that –” Antoine was saying, when Bruce cut her off, saying, “I am asking you whether you were aware.”

“Not that that I recall. I never heard that happening at the police department,” Antoine said.

She told the court that the fact that she never heard it does not mean that it was not happening.

She said that if temporary workers at Police Headquarters were allowed to access and enter information on SmartStream using other people’s log-in, as Bruce suggested, it should have been reported.

“Where that practice practically becomes the culture, you don’t expect persons to call in and report, right?’ Bruce said.

“Yes. I am expecting that,” Antoine told the court.

“If the user knows someone is using their account, they should report that. Go to the deputy, the Commissioner of Police, the Treasury; you can change your password. All those are available to you,” Antoine told the court.

She said her cross examination was the first time that she was hearing that it was the culture at the police department for people to use each other’s accounts.

“I have had conversations with the users that were there and none of them have said that,” Antoine told the court.

Bruce responded: “I trust that the others are square with you because you are a hard, honest worker.”

Antoine testified that her office assumes that all company documents submitted by government departments are legitimate and no further checks are done on them.

She said that before an entity is entered as a payee on the Treasury’s payroll, the department through which the entity is doing business with the government has to submit certain documents.

“It is just a document submitted by the department stating the name of the company — maybe their registration number. No signature is required from anybody at that point,” Antoine told the court.

“We assume it is bona fide so we do not check,” Antoine said. “It is only at collection time that we require certain information.”

She acknowledged, as the lawyer suggested, that it would be “a colossal waste of time” if, at the point of the entity collecting the payment, that it realised that the entity does not exist.

Antoine said that if a company is collecting a cheque at the Treasury Department, the person is expected to produce the company stamp and sign off of the documents.

“If it is an individual, they would come with their ID,” she said, adding that it is permissible to authorise other people to collect documents on one’s behalf.

“There is not in place a policy the people they can authorise to collect,” she said, adding that the person to whom the cheque is made out must give a letter to the person collecting the cheque.

The person collecting the cheque must produce his national identification card as well as that of the person to whom the cheque is made out.

“You can send any Tom, Dick or Harry to collect as long as they have the appropriate document to collect on your behalf,” she said, responding to Bruce.

The accountant general told the court that where a vendor asks an enterer on SmartStream to collect a cheque on the vendor’s behalf and the enterer does so, there is no policy violation.

She said that if Prescott showed up to collect a cheque on behalf of Gareth Sayers or any other vendor, she was not violating any policy.

She said the matter allegedly involving Prescott first came to her attention when she learnt, after the fact, that her (Antoine’s) personal secretary had had documents in her hand and was assisting in the payment of a cheque.

She said there is no policy forbidding an enterer from collecting cheques relating to an entry that an enterer had made on SmartStream.

“I see that as a red flag,” Antoine said. “I called in the person seemingly associated with this red flag. I told her I would not like to see that happening again. I told her this is a reflag for the audit.”

Antoine said that having told Prescott that such a practice was a red flag, it happened again, but she did not have any of that information that she had put as evidence before the court.

She said that apart from Prescott, she did not tell any of her subordinates that such a practice was a “red flag”.

“No. Not at that point. I did not tell them that. Not in those words,” Antoine told the court, adding that she told her staff that if there are such cases, they should “look into them to make sure they are onboard – above board.

“We have husbands in the department who approve stuff and stuff would come to them for their wives, for their children. And we want to avoid the situation why we are here today,” she said.

Antoine said that at that point the matter was between her and Mr. Mc Donald, the supervisor who brought it to her attention and.

She said she had given instruction to Mr. Mc Donald to do research after the matter came to her attention.

Antoine told the court that the person charged with approving payments at Police Headquarters at the material point was Saline Barber.

Asked if she knew that Barber lacked certain competences in SmartStream, Antoine said, “I don’t know what competencies she lacked. At that time, she was new.”

The accountant general said the approver in any department has a duty to ensure that requests coming from government departments and the preparation of purchase orders are done in keeping with the accounting regulations.

“Where an approver proceeded to approve, what is the liability of the enterer?” Bruce asked.

“If the enterer enters it and it was signed off by her department, there is no liability,” she told the court.