SVG secures loan for purchase of wooden houses from Guyana 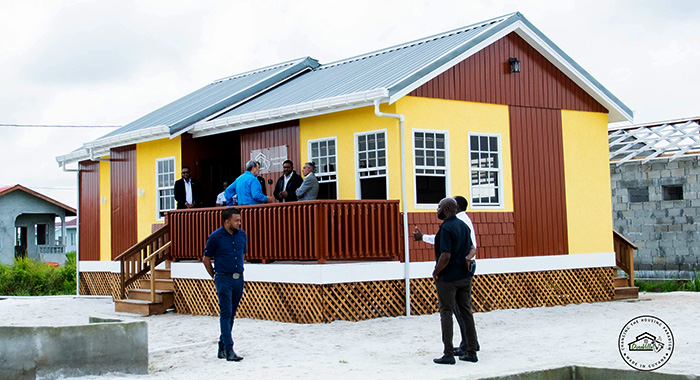 St. Vincent and the Grenadines is finalising negotiations with Demerara Bank in Guyana for a loan to buy wooden houses for Vincentians whose houses were damaged by the eruption of La Soufriere volcano.

Prime Minister Ralph Gonsalves visited Guyana this week for a four-day official visit, a follow up on a visit last year by Minister of Housing, Montgomery Daniel and Minister of National Mobilisation, Orando Brewster.

The government is borrowing from Demerara Bank, an indigenous bank in Guyana, US$2.2 million for the purchase of the greenheart prefabricated wooden houses from DuraVilla Homes Guyana, Inc.

Gonsalves said the one-bedroom houses are 333 square feet, the two-bedroom, 526 square feet and three-bedrooms, 776 square feet. The technical members of Daniel’s delegation had suggested some alterations to the pre-existing designs.

“And they are laid out beautifully. And the idea is to have them certainly grounded in the concrete, in the cement, so that we can have perhaps category 4, hurricane resilient,” he said, adding that the homes can certainly withstand a category 3 hurricane.

“I think people are going to love them,” he said, adding that the prices are “pretty good”, noting that the three-bedroom house would cost about EC$100,000.

He said the US$2.2 million loan would translate to about EC$6 million and would be for seven years at 5% interest on the reducing balance.

Gonsalves said while the interest rate is not as low as development banks’ or the 2% offered by Taiwan, it is “a good interest rate”.

“But given the rise in interest rates globally, 5% is a very good interest rate,” Gonsalves said. “I think people hearing me would say they wish they could get money at 5% and it’s on the declining balance.”

He said his government would receive the loan documents in a few days and the bank wants to travel to Kingstown to sign between Jan. 19 and 21 and to see the sites where the houses will be built in North Leeward, North Central Windward and North Windward.

“Those are the three which are mainly affected by the volcano,” Gonsalves said.

He said that when some people hear about timbre houses, they think of plywood.

“This is hardwood. This lasts as long as concrete; it is very durable,” he said.

“… I believe that when people see them that we are going to have a big demand… So that we will probably have to work out arrangements to get some more but we will see how that goes. And how the demand is in the system,” Gonsalves said.

Daniel, who was also a guest on the programme, said there are greenheart houses in London, Sandy Bay, which were constructed in 1980.

Gonsalves, 76, said that while the construction of wooden houses was not encouraged in St. Vincent so as to protect the forest, houses were built out of greenheart when he was a young man and they lasted for generations.

“Some of the traditional colonial houses, which have stood the test of time were greenheart, lasted for generations. Some of them was what we call locus… Some of them wallaba…

“Now, if, as I expect, these houses to be very attractive to persons, after this first 50 which we are hoping to get by the end of March, once all the documentations are signed, we can make arrangements for others. And then to build them like the low-income houses which we had done before for persons to go to the bank and try and do them through HLDC.”

He, however, reiterated that the houses are for people who were affected by the volcano.