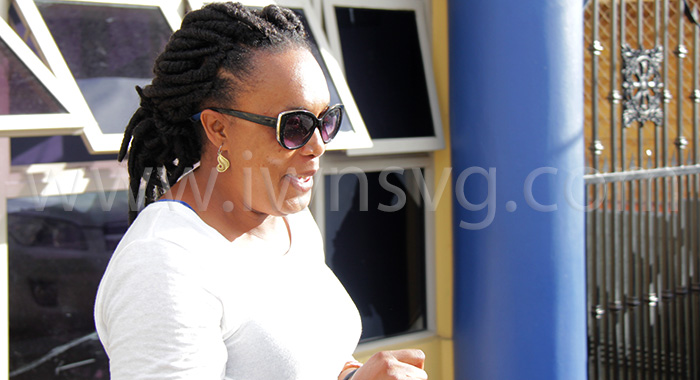 The defendant, Mitra-Ann Prescott outside the Kingstown Magistrate’s Court on Jan. 4, 2023.

The prosecution has withdrawn the three official corruption charges against the woman accused of stealing EC$154,000 from the government.

Mitra-Ann Prescott, of Harmony Hall, is alleged to have stolen the money through a tyre purchase scam, reportedly operated from Police Headquarters.

The charges stem from the alleged processing of fraudulent claims related to the alleged supply of tyres for police vehicles.

On Friday, after the prosecutor, Crown Counsel Rose-Ann Richardson closed her case, defence counsel Israel Bruce told the court that he intends to make a no-case submission on the theft charges.

Senior Magistrate Rickie Burnett gave Bruce up to Jan. 23 to make his no case submission in writing.

The Crown has a week to respond and the magistrate will inform both parties of a date to return to the Kingstown Magistrate’s Court for his ruling.

The Crown has alleged that between Aug. 11 and Dec. 29, 2017 at Kingstown, Prescott, a junior clerk attached to Police Headquarter, stole EC$6,500, the property of the Government of St. Vincent and the Grenadines (GoSVG).

At her arraignment in 2019, Prescott was released on EC$150,000 with one surety and was ordered to report to the Calliaqua Police Station on Mondays between 6 a.m. and 6 p.m.

The accused woman was further ordered to surrender her travel documents and to seek the permission of the court to leave the state.

The court also ordered that notices be placed at ports of exit and entry, preventing Prescott from leaving the jurisdiction.