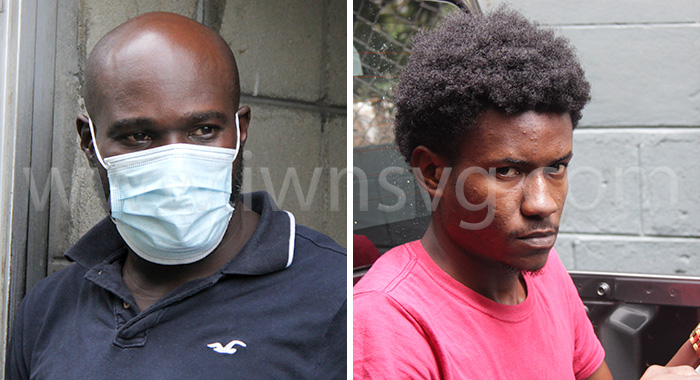 The defendants, Kevin Lewis, left, and Jomodean Alexander outside the Serious Offences Court on Friday, Jan. 6, 2022.

A taxi driver and one of his passengers were jailed, on Friday, after they were each nabbed with a firearm, ammunition and cocaine.

The taxi driver, Kevin Lewis, 38, of Campden Park, had the gun stuffed in his crotch with a round in the breech when he was searched at the Calliaqua Police Station.

Jomodean Alexander, 25, of Richmond Hill surrendered his firearm when police went to his home.

The weapon was fitted with an extended magazine containing nine rounds, but with a capacity of 25, causing Chief Magistrate Rechanne Browne and prosecutor acting Corporal of Police Shamrack Pierre to wonder if the extended magazine was ever full.

Browne ordered the men serve three years in prison, the lesser of the consecutive sentences imposed on them for firearm and ammunition charges.

In the sitting at the Serious Offences Court, she also fined the men in connection with their respective drug charges, imposing jail time in default.

It was the first time that Lewis was offending but in December Alexander the Serious Offences Court fined Alexander EC$53,000 for cocaine and marijuana possession.

Lewis pleaded guilty to charges that:

· on Jan. 4, at Brighton, he had in his possession one Taurus 9mm pistol, serial number ABC349557, without a licensed issued under the Firearms Act;

· on Jan. 4, at Brighton, he had in his possession eight rounds of .9mm ammunition without a licence;

· on Jan. 5, at Campden Park, he had in his possession eight grammes of cocaine with intent to supply it to another;

· on Jan. 5, at Campden Park, he had in his possession a controlled drug, to wit 775 grammes of cannabis with intent to supply it to another.

Lewis, Alexander and Glenly Lee, of Sion Hill, were jointly charged that on Jan. 4, at Brighton, they had in their possession a controlled drug, to wit 17 grammes of cocaine with intent to supply it to another.

Lewis pleaded guilty to the charge and his co-accused pleaded not guilty. The prosecutor withdrew the charge against the other accused.

· on Jan. 4, at Brighton, he had in his possession a controlled drug, to wit 18 grammes of cocaine with intent to supply it to another;

· on Jan. 4, at Brighton, had in his possession 26 rounds of .9mm ammunition without a licence issued under the Firearms Act; and

· on Jan. 4, at Brighton, he had in his possession one Glock 19 pistol, serial number unknown, without a licence issued under the Firearm Act.

The facts, as presented by Pierre are that on Jan. 4, about 10:45 p.m. Sergeant 403 John headed a party of Rapid Response Unit officers on random stop and search about the Calliaqua district.

While near Brighton Gap, the officer saw a taxi, H5393, a black Noah van approaching from the direction of Calliaqua.

The driver complied with John’s signal to stop and the occupants of the vehicle consented to a search.

However, because it was raining heavily, the police escorted the vehicle and the occupants to the Calliaqua Police Station.

When cautioned, Lewis responded, “Officer, you find it in my van, so is mine.”

Hadaway told Lewis he would be arrested on inquiries and on entering the police station conducted a search on Lewis’ person.

During the search, the officer found the firearm in Lewis’ crotch.

The pistol was found to be loaded with one round in the breech and seven rounds in the magazine, which was fitted to the weapon.

Hadaway reminded Lewis that he was still under caution and Lewis replied, “Officer, you find it pon me, so a mine.”

The men were kept in custody and on the following day, Jan. 5, about 9:30 a.m., Lewis was escorted to his home in Campden Park and he consented to search.

Lewis’s girlfriend was also met there.

PC Gould found the marijuana in five transparent bags in a multicolour Massy Store bag in a cupboard.

“Officer, me know, me know ah mine,” Lewis said when shown the drug.

‘An ounce of cocaine and a firearm’

After the taxi was stopped at Brighton Gap on Jan. 4, Alexander was escorted to his home.

John asked him if he had anything illegal to declare and he told the office he had an ounce of cocaine and a firearm.

The sergeant instructed Alexander to hand them over and he pointed to two knapsacks, one blue and one brown. The cocaine was found in a white sock.

“Is my coke; that is all I have left,” Alexander said when cautioned.

The sergeant found the firearm in the brown knapsack. The weapon was fitted with a magazine with a capacity of 25 rounds, which contained nine rounds. Another magazine was full to capacity with 17 rounds.

“Officer, yo done see how things ah go so is for my protection,” Alexander told the police.

Weapons and ammunition specialist Station Sergeant Julian Cain conducted function checks on the weapons and found them to be in good working order and the ammunition live.

The Narcotics Unit weighed and tested the white powdery substances and found them to be cocaine.

Cocaine for personal use

In mitigation, Counsel Grant Connell who represented the defendants, told the court that Lewis is a father of two children — a 5-year-old boy and a 9-month-old girl.

He noted that his client has no previous conviction and expressed extreme remorse for his actions.

The lawyer said that Lewis assisted the police and did not resist at all.

He said that the prevalence of firearms and the fact that they are used in most homicides in St. Vincent and the Grenadines, of which there were 42 last year, is aggravating.

Connell said that mitigating was the “quasi voluntary surrender” of the firearm, adding that the drugs were for Lewis’ personal use.

The magistrate asked if the 9-month-baby lives with Lewis and the lawyer said yes.

“I am just interested in his use when he has the baby,” Browne commented.

“Most of the time when these things are for personal use, they are very well secured,” Connell said.

The magistrate said she was not sure about that, adding that bottles of tea and feed could be on a kitchen table.

Numbing pain with rum or coke

The lawyer said that according to his instructions, there was an element of coercion and exploitation in Alexander’s possession of the firearm.

He said that while Alexander has a record for cocaine possession, in the extant case, the cocaine was for his personal use.

“… and that is a bit disturbing and I think he is in need of counselling,” Connell said.

“In SVG, we don’t take these things seriously when we see a trend,” the lawyer said.

But the magistrate countered that there was a defendant in her court the previous day, who said he only uses cocaine when he is in pain.

“I think you are in a better position to know than me,” the magistrate responded.

The lawyer asked the court to impose a fine on Alexander for the firearm, saying that filling the prisons would not stop firearms from entering the country.

Alexander told the court that he had previously spent 111 days in prison.

Alexander told the court that he graduated from the Community College, having completed the automotive repairs programme there.

Connell asked the court to look into having him attached to a garage.

“The clanging of metal doors has proven to not work with him,” the lawyer said.

However, the magistrate said the choices that people make affect them

“I sit here often and I am saddened. For the year, I see no female making no such choice. They may be smarter criminals. But the young men are often here based on their choices.”

In his submission on sentencing, Pierre told the court that as regards Alexander, the only mitigating factor is that he assisted the police.

“And it takes good proper policing to get that assistance,” the prosecutor said, and commended the officers.

He said the capacity of the extended magazine and the number of rounds were aggravating.

“The question I invite the court to ponder upon, ‘Where are the remaining 16 rounds?’” he said, referring to the extended magazine.

“Cocaine and firearms equal crime. So, these are very aggravating factors,” the prosecutor told the court.

He said that regarding Lewis, the guilty plea and fact that he had no previous conviction were the only mitigating factors.

“What is aggravating, he is a taxi driver, the time of the night when the police did their random search.”

“He was taken to Calliaqua, where the substance (cocaine) was found. He had concealed in his crotch a firearm. If he had declared that he had it, it could have been deemed assistance. When a search was conducted it was found.”

The prosecutor also made a point of the variety of firearms that are coming before the court.

“I have been in the service for 20 years and it is the first time I am seeing a purple firearm. It was well kept,” Pierre said.

He said that regarding the drug, with a 9-month-old child in a house a white powdery substance could be mistaken for milk.

“A cupboard is where food is stored, so the baby could have gotten a dose of that,” Pierre said.

He asked the court to use its sentence to send a strong message to those who wish to offend.

In handing down her sentence, the chief magistrate told Alexander that it is regrettably that he is coming before the court for the first time in his 38 years on such serious offences.

“If war had broken out as the prosecution suggested, you could have been in cold storage somewhere and your parents grieving and your compadres would have said, ‘Let me drink something on that; we sorry they do down so,” she told the defendant.

She told the defendants that cocaine is “a most detestable drug”.

She said there was no indication before the search that Lewis had a firearm in his possession.

“There have been facts before where they saw a bulge, but in this case, there was nothing,” she said.

After doing the calculations, including deducting one-third of the sentence for the guilty plea, the magistrate arrived at a sentence of two years and seven months in prison, but stepped away from the guideline and increased it by three months for the firearm charge.

She sentenced Lewis to 11 months for the ammunition and ordered that the sentences run concurrently, noting that while the offences are on different days, they spring from a single investigation.

The magistrate fined Alexander EC$1,400 for the cocaine, to be paid forthwith or three months in prison.

She said his possession of the firearm was motivated by revenge. “Why do you need it to protect oneself if the actions are not questionable?” she said.

For the ammunition, Lewis was sentenced to two years in prison. The sentences will run concurrently.

“Mr. Alexander, contrary to many of the defendants who come before this court, you have had an opportunity to have a taste of tertiary education,” Browne said.

“Make the right choice. This period, I hope, will be a period of reflection. Make the right decision about your actions. Think carefully so that on your release something different can happen. You owe loyalty to yourself.”