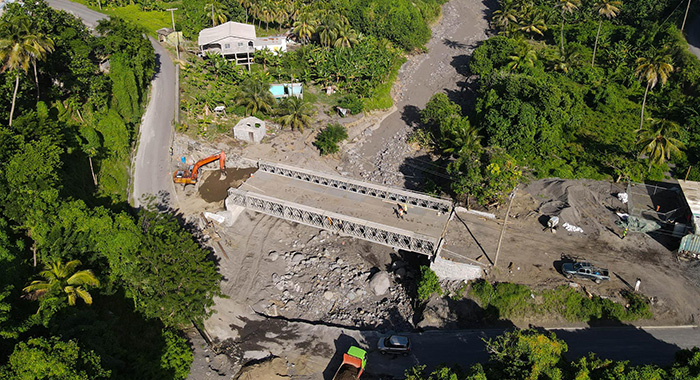 The Overland Bridge in photos posted on Facebook by Sea Operations Ltd. on Dec. 15, 2022.

It now seems that the two Bailey bridges that North Windward MP Montgomery Daniel had said would have been an “early Christmas present” would now become Valentine’s gifts.

Daniel, who is also deputy prime minister and minister of works, had said that the bridges being built in Overland and Noel would have been finished in time for the Yuletide season.

However, that did not materialise and he said on NBC Radio this past week that the new target is February.

This is at least the fourth revised timeline for the completion of the bridges, with August and September 2022 having also been given as targeted completion dates.

Over the past decade or so, the seasonal flows of streams in these areas have become progressively worse, and sometimes commuters are stuck on either side for hours as they wait for the flow to subside.

The bridges are expected to address this problem for pedestrians and motorists.

“… my last discussion with the engineers responsible did indicate the possibility existed that we could have had the access of the bridges, depending on the speed of the work by the contractors,” Daniel told NBC Radio.

“But during that period of time, there continued to be heavy rains in that area, and it … really slowed down much of the work that was ongoing at the time.”

He further said that the work ethic as the Christmas season approached was also an issue.

“… once it’s Christmas time, that kind of work ethic, the work attitude is by the 15th of December, you’re ready to go off,” the works minister said.

“But one would expect that by the middle of February, the end of February, that there will be access through the Bailey bridges north of the Rabacca Dry River.”