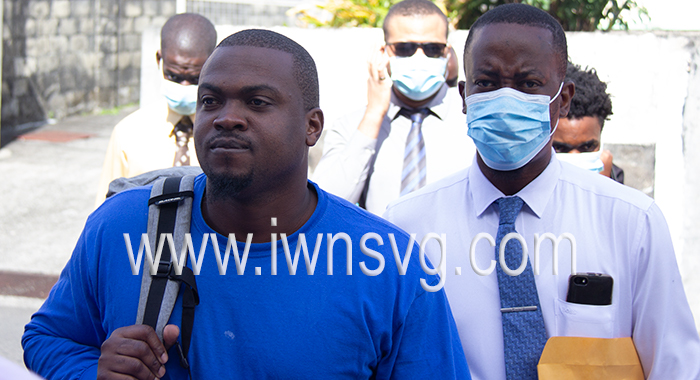 Activist Kenson King, outside the Kingstown Magistrate’s Court on March 28, 2022.

Prison warder and activist Kenson King has been found not guilty of the July 2020 charge that he wounded a prisoner, his lawyer, Jomo Thomas has told iWitness News.

Senior magistrate Rickie Burnett handed down the verdict at the Kingstown Magistrate’s Court today (Friday), after a trial in which prosecution witnesses contradicted the account of the virtual complainant, the lawyer said.

King, 35, of Park Hill, was tried on a charge that on June 27, at Her Majesty’s Prisons in Kingstown, he unlawfully and maliciously wounded prisoner Dorian Mapp, 23, of Victoria Village.

Thomas told iWitness News that the manner in which his client was charged was “uncharacteristic” in terms of how allegations of prison officers abusing prisoners are handled.

He suggested that King might have been pursued because of his political activism rather than his handling of the situation involving the prisoner.

“The state actually brought it against Kenson King because there was an accusation by a prisoner that he was abused by Kenson King and they did not go through the normal procedure,” Thomas said.

“Normally, what would happen is that there would be an internal investigation at the prison, a report will be sent to the permanent secretary in the Ministry of National Security and if the PS is concerned, the PS would send the report over the Director of Public Prosecutions who would make a decision as to whether there’s going to be a trial or not,” he told iWitness News.

“That didn’t happen. Once the report was received that King — especially understanding who [he] is — had been in this altercation with a prisoner, the police went and arrested him. “

Thomas said that at the trial, former superintendent of Prisons, Brenton Charles, testified that in his over 30 years at the prisons, during which time there were numerous allegations against prison officers, “it never happened in the way in which it happened with Mr. King.

“A number of other senior police officers said the same thing,” Thomas said.

He said that Mapp alleged during the trial that King had brutalised him.

“The prosecution witnesses said that the prisoner, Dorian Mapp, was very, very aggressive throughout. That they were trying to get him out of the cell because he was creating a disturbance in the cell,” Thomas told iWitness News.

“They could not get him out. On the contrary, he said he was very cooperative and he came out easily. The chief prison officer at the time, whose name is also Mapp, said the man was so uncooperative, that he had to send for Mr. King from another part of the prison to help them to get him out.

“And Mr. King said he tapped him on the shoulder and told him to come out, told him to behave himself, and he (the prisoner) slapped him and he (King), in response, slapped him back. The prison officers supported that.”

“However, under cross examination, Isaiah King was compromised in the sense that he admitted that he might have been paid. Because when I asked him, ‘Were you not offered payment to give this evidence?’ He said, ‘I can’t comment on that … I won’t be commenting on that’; or something like that,” Thomas told iWitness News.

He, however, said that Simeon Francois another prisoner, told the court that the complainant had offered him money to offer a false account of what took place.

“Simeon said that the man did come to him and ask him and say, ‘Look, if we bring this matter against King, all ah we could eat ah food. I go pay you.’ And Simeon said, ‘I am not going to take any payment from you. If I have to go to court, I’m going to go to court and tell the truth.’

“And that’s what he did. He came, he told the truth that, yes, he saw part of the altercation and there was a slap and a response slap. But the complainant had offered him money to tell lies but he refused to tell lies.”

Thomas said that when the magistrate assessed the case,  he concluded that the prosecution’s case was inconsistent, that many of the prosecution witnesses contradicted what Dorian Mapp said.

The lawyer said the magistrate did an analysis “of self defence, proportionality, and so on” and concluded in the end that based on the evidence before him, “he had to come back with a verdict of not guilty”.

Thomas told iWitness News that his client is a known opponent of the government who lives in the prime minister’s constituency and “has had a number of run-ins with them with his postings, with his actions”.

He said it was not the first time that King had been detained.

“So, I’m saying when the report came, that Kenson might have been in an altercation with a prisoner, they thought that they could use it to get him — this is just me surmising; I don’t know that for a fact — out of the prison service…

“So that might explain why they didn’t follow the normal procedure of having the prison investigation and then the superintendent of prison report it to the PS in the Ministry of National Security. In other words, they didn’t follow that chain that they normally follow. The important thing is that, well from my client’s standpoint, he was found not guilty,” Thomas said, adding that King has been a prison warder for more than 15 years.