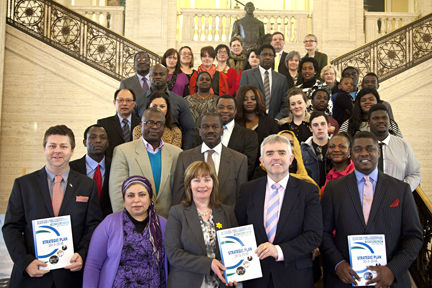 The Strategy focuses on eight specific objectives to increase Caribbean and African Integration, Community Development, Cohesion, Empowerment and Entrepreneurship, with a primary focus on furthering engagement with all stakeholders and communities in Northern Ireland.

The event was attended and supported by leaders of the various National Caribbean and African Associations as well as key stakeholders and statutory bodies in Northern Ireland.

Junior Minister Bell said, “Since its formation in 2003 ACSONI has grown in size, stature and regard until it has become a key member of the minority ethnic community here. As it has grown so has the breadth and scale of its services offered and ambitions. I am impressed with the eight strategic aims you have set out because they promote a fair and equal society which embraces and celebrates Northern Ireland’s increasingly inter-cultural identity in the spirit of mutual respect and growth.”

Junior Minister McCann said, “Starting a new life in a new country can be a very daunting and challenging experience. People can feel isolated, alienated and vulnerable. ACSONI do so much to address this and play an increasingly important role in helping to inspire, challenge, help and advocate for their membership. ACSONI has for 10 years represented the pride, drive and talent of the African Caribbean people here and I am confident this strategy will continue that work for the next five years and beyond.”

Dr. Stange added, “We are committed to social cohesion and integration, because of the enrichment it provides. An inclusive, integrated, equal and shared society, which is at peace with itself, is what we are determined to achieve. We are working for a shared brighter future no matter of race, background or creed, that every citizen has equal opportunity and full participation in civic life.”

The Caribbean and African Diaspora is becoming one of the largest, diverse and fastest growing ethnic minority communities in Northern Ireland.

The event concluded with a live musical performance from ACSONI’s Community Got Talent representatives followed by a luncheon and Fairtrade refreshments.