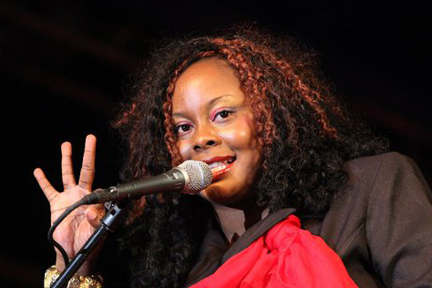 KINGSTOWN, St. Vincent, April 23, IWN – The ruling Unity Labour Party’s (ULP) custodian for West Kingstown says she has no comment “at this time” as some constituents seek to have her removed as the party’s candidate there ahead of the next general election — constitutionally due by March 2016.

“When I am ready to comment, I will let you know,” Michelle Fife told I-Witness News on Friday.

Fife, a lawyer and former Miss SVG, failed to retain West Kingstown for the ULP in 2010 after former minister of culture, Rene Baptiste opted not to run again, after two terms.

Her comments came as a ULP insider told I-Witness News on April 4 that constituents are trying to collect 1,000 signatures to force the ULP leadership to acknowledge that they never wanted Fife as their candidate.

“Even though I know about it (the petition), I am not prepared to comment officially,” Fife, the legal advisor at the Ministry of Foreign Affairs, told I-Witness News.

“Everywhere you go, you will have those who are satisfied. I am not sure what my comments will do to balance that story, really,” she said.

Three ULP insiders and West Kingstown constituents, who each asked not to be named in this article, spoke to I-Witness News separately this month and complained about their dissatisfaction with Fife as a politician and ULP candidate.

The West Kingstown constituent, who contacted I-Witness News, said Fife was foisted upon them during the in-house primaries ahead of the 2010 vote, although constituents preferred diplomat, Ellsworth John.

“The last general elections, there was an in-house fight between Miss Fife and Ellsworth John and the Prime Minister (Dr. Ralph Gonsalves) intervened at a meeting in Stoney Ground to throw his weight behind Michelle, who most of the people didn’t want anyway,” the ULP insider, who asked for anonymity because of the sensitive nature of the issue, told I-Witness News on April 4.

The source said a group of people had gone to Gonsalves, who is political leader of the ULP, to try to convince him that Fife should not be the candidate after a confrontation she reportedly had with someone.

“Even before then, people had gone to him and spent five hours with him just bringing them back to ‘She will be the better candidate,’” the ULP insider said.

In 2010, at her first outing at the polls, Fife lost to engineer Daniel Cummings of the opposition New Democratic Party, even as the ULP was returned to office for a third consecutive term by a one-seat majority.

But the source said that Fife was absent from the constituency for a year after her defeat.

“… she decided that after a year of absence in the constituency, to come back with the intention to run,” the ULP supporter further told I-Witness News.

The source said Fife “is basically the person responsible [in West Kingstown] for all those activities that the Government normally uses to create employment opportunities for a constituency. So, she has the power of a constituency representative….

The source said a number of persons are seeking alternative candidates.

The source further said that Mark Dennie, a fisherman who had drifted at sea from St. Vincent to Puerto Rico, is so adamant that Fife should not run again that he is proposing to run himself.

The name of Assistant Director of Public Prosecutions, Colin John, has also surfaced, the ULP supporter said, adding, “He seems to be accepting the challenge.

“They had gone to him also and he had said no, initially. But he has shown his interest in contesting.

“But I think what Mark is doing is that [he wants] anybody but Michelle so he is putting himself up.”

The source further said that at the closed session of the last ULP convention, the situation almost turned to blows as the Fife camp responded to constituents’ dissatisfaction with her stewardship.

“Last convention, they wanted to fight this girl…” the source said.

“They had about 17 persons in the line (to address the meeting) and about 10 persons went there to talk about their dissatisfaction with the West Kingstown caretaker,” the source further said.

“The girl was at the podium … and they left their seats and walked all the way up to try to fight her. And the chairman, Mr. [Edwin] Snagg, was trying to get them under control and they were continuing with their behaviour.

“The chairman mentioned that the police (the Prime Minister’s Security Detail) weren’t too far away — because Ralph was sitting at the rostrum — and they came in and broke it up and then Ralph got up and said he was very disappointed in what happened and that he had never seen anything like it before. And he said this is not what the ULP is about, that the young lady should get her say.

“A couple of other persons, they got boos and stuff from the Michelle camp. Because it was basically persons going there to show their disgust,” the source said.

The source further spoke of a possible return of Baptiste to the constituency.

“The strong echo is Rene is going to come back,” the source further said, adding that the former area representative, a lawyer, has said that she would run again if asked.

In March, a member of the ULP leadership hinted to I-Witness News of a possible return of Baptiste, saying West Kingstown constituents are suffering from “buyer’s remorse”. The ULP heavy weight said that while Baptiste was in office, some constituents had complained about someone who had functioned as her de facto driver.

But the member of the ULP leadership said Baptiste had problems with her knees, which she has had threated since quitting electoral politics.

The member of the ULP leadership further said that Baptiste has remained above the political fray and continues her work with the church and other organisations here.

Baptiste was elected as speaker of the OECS Assembly last August, a position she currently holds.

Meanwhile, the West Kingstown constituent who spoke to I-Witness News was not impressed with Fife as a politician.

“She is full of conflict. Being young has nothing to do with it, but she is not ready for that. That is not her, so I will not support her for that,” the source said.

Meanwhile, two other ULP insiders, in separate interviews, substantiated the first source’s comments and also expressed dissatisfaction with Fife as a candidate and politician.

They said also that they do not want her to be the ULP’s candidate in West Kingstown in 2015.