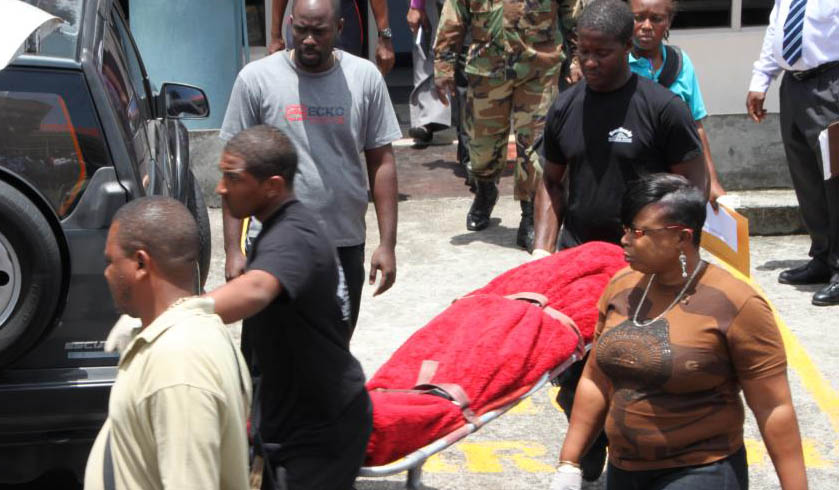 KINGSTOWN, St. Vincent, May 14, IWN – The prisoner shot and killed by police inside a court building in Kingstown on Tuesday was in handcuffs moments before he met his death, a court reporter tells I-Witness News.

Police shot and killed Anthony “Scarface” Hamilton in the vicinity of the washroom of the Kingstown Magistrate’s Court.

Hamilton met his death a few weeks after he was released from prison, having served 16 years for rape.

Since his release, he was freed of a charge relating to an alleged threat on the life of Prime Minister Dr. Ralph Gonsalves.

He was in court on Tuesday in connection with a robbery charge and was said to have been in the holding area of the Serious Offences Court before being escorted to the washroom.

Hamilton’s death brings to four the number of persons shot by police here over the past 10 days. The three other persons, including a man who escaped police custody during questioning, survived their injuries.

The plain clothes officer and his grey and black uniform colleague were escorting Hamilton from the second storey of the building in Paul Avenue, where the Serious Offences Court is located, to the ground floor, which houses the Kingstown Magistrate’s Court – which was not in session.

“I immediately proceeded into the Kingstown Magistrate’s Court and I saw Hamilton — part of his body — lying facedown on the floor … in the area of the bathroom,” Peter said.

He said the woman who spoke of the shooting seemed to be an office worker in the building, which also houses the Family Services Division.

“She was kind of like almost traumatised and she was holding her chest and telling a lawyer who was just coming to court that somebody had got shot; [that] there is a shooting inside the court.

“So, immediately, I proceeded with the lawyer into the area. At the time, only two police officers were there. And, … realising that it is potentially a crime scene, I came back [outside]” said Peters, a former cop.

Peters said that Hamilton was calm when he saw him being escorted by the police officers.

“When I saw him, he wasn’t saying anything. He was walking along with them. … I was in the company of somebody and I saw him for about three seconds…” Peters said.

He said that it is standard for two officers to escort prisoners to the bathroom but not all prisoners are handcuffed when being taken there.

Peters, however, said that while Hamilton was handcuffed when the officers were escorting him, he could not say if the handcuffs were still on after the shooting.

“I couldn’t have seen, at the time, that part of his body … and he was lying kind of more on his stomach,” Peters told I-Witness News.

Prime Minister Gonsalves, who is also Minister of National Security, told a pre-planned press conference Tuesday afternoon that he had been briefed on the broad details of the incident but was awaiting a written report from the police chief.

“I don’t know if I should say it. But there are certain things… that I also observed [at the court], but, because I don’t know what might happen in terms of the investigation, I cannot say. “… Just a while ago, as I was in the press conference there, what I saw was actually replaying in my mind and after a while I couldn’t concentrate on what was going on. I just wanted to be out,” he told I-Witness News.

Reports say that Hamilton was shot after he attempted to escape.

Security mechanisms at the court building have been improved after some prisoners escaped, having smearing the walls and themselves with faeces.

And Peters said that based on his knowledge of the building and his training as a former cop he does not think it is that easy for a prisoner to escape in light of the improved security.

“Well, what has happened, since several incidents of persons smearing the walls with faeces and effecting their escape, the court, or the administration, has put in some security measures, in that they have put burglar bars on the window, and there is a security panel door, which means there are two doors when you are going into the magistrate’s office or through that toilet area.

And Peters said the doors might have muffled the gunshot(s).

“I didn’t hear any shots. And, my belief is that because of the double doors the sounds might have been stifled.”

Peters said that as a court and crime reporter he has known Hamilton for about 17 years.

Peters said that after Hamilton’s release from prison he was pleading for help with building a house.

“He did tell me that the Family Affairs Division and other arms of government were trying to help him with a house, because he said on release from prison he had no place to go and he was very concerned….

“That was one of his major concerns: that he needed a shelter.”