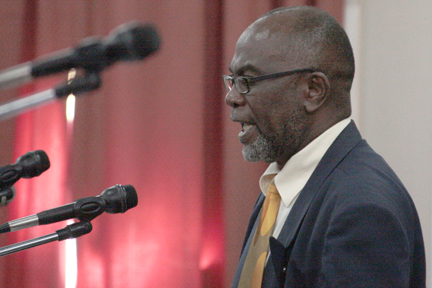 Parliamentary Representative for Central Kingstown, St. Clair Leacock, says this country should be washing with money as a result of the EC$652 million project.

KINGSTOWN, St. Vincent, May 29, IWN – Opposition lawmaker St. Clair Leacock on Monday called on the Dr. Ralph Gonsalves government to “come clean” and tell the nation the extent of the debt so far to build the Argyle international airport.

Leacock, who is parliamentary representative for Central Kingstown, said that the country should be “washing with money” as a result of the EC$652 million project.

But he told lawmakers that he had concluded that more money leaves the country for Cuba than remains in St. Vincent and the Grenadines as a result of the project.

He also called on the Government to disclose the commercial sources of loans, as it does with the Bolivarian Alliance for the Peoples of Our America (ALBA) bank.

Gonsalves told Parliament on Monday that the ALBA Bank has made available to this country a loan of US$40 million. The soft loan is for 22 years.

“It is sufficient to refer to the [commercial] banks in passing and feel that it is beyond the rights of this Honourable House to have that kind of information. And I think it should be corrected, Mr. Speaker,” Leacock said.

“Every one should know where we are in relation to the cost so the nation can find appropriate means to see the financing through. …

“And Mr. Speaker, the Honourable Prime Minister must stop what is clearly nonsense to suggest that the financing of the airport, with source funds from ALBA and other third parties, has no consequences on the taxpayers of St. Vincent and the Grenadines. Once you use the word loan, you say taxpayers,” Leacock further said.

He further criticised the Government’s arrangement of diverting money to the airport without the fund first going through the Consolidated Fund.

“It is nonsense, Mr. Speaker, because, to the extent that we are speaking loans, we are speaking taxpayers. And no one must attempt to pull wool over our eyes that it is coming from Cuba and ALBA and X and Y and Z.”

Leacock said the nation’s roads, schools, and hospital and other services are worse off because of the construction of the airport and asked how many Vincentians are employed as a result of the project.

“This country should be washing with money,” he said, adding that the positive effects of the project are not being felt across the country.

“It should be more pervasive across this country of St. Vincent and the Grenadines.”

Leacock said the nation is drowning in debt and future generations would ask about the context in which decisions about the airport were made.

“And it is time that the Government comes clean with this Parliament and the people of St. Vincent and the Grenadines and let us have a clear understanding at the end of the day what will be the extent of the debt, and how we are going to get out of it,” he said.