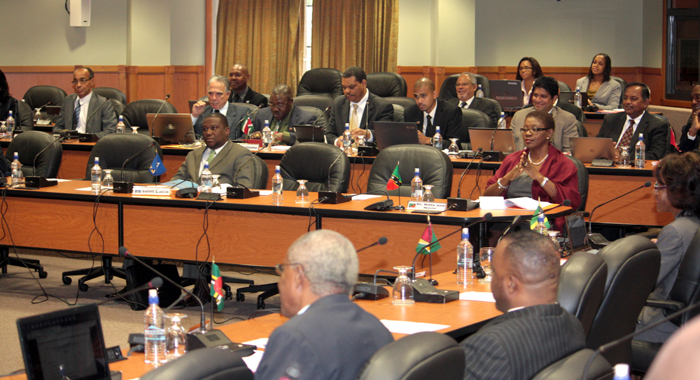 Participants at the one-day Special Meeting of the Council for Trade and Economic Development on Transportation held in St. Vincent and the Grenadines last week. (IWN photo)

The ministers made the recommendation the one-day Special Meeting of the Council for Trade and Economic Development (COTED) on Transportation held in St. Vincent and the Grenadines.

Recommendations from the meeting will be presented to Heads of Government at the 34th Regular Meeting to be held in Trinidad and Tobago July 4 to 6 at which transportation will receive special attention.

The ministers said CARICOM nationals encountered unnecessary problems as they travelled across the region and this was not only limited to scant regard paid to the CARICOM Passport which entitles holders to an automatic six-month stay in member states.

The meeting recognized that there were challenges with respect to frequent security checks and co-operation between the regional airlines, among other things, which negatively affected the travelling public and had repercussions for business and tourism as well.

The Ministers also agreed that much work had to be done to improve customer service among border control officers in the region.

The Meeting agreed that the Conference of Heads of Government should be asked to revisit its decision to discontinue the inexpensive arm band system which facilitated hassle free regional travel during the World Cup, The success of that 2007 initiative was alluded to during the discussion, in particular its popularity with CARICOM citizens.

Among the features of the SDS were, freedom of movement for all domestic travellers and a special visa stamped at the first port of entry for travellers from outside the region to allow hassle free movement among the participating SDS states.