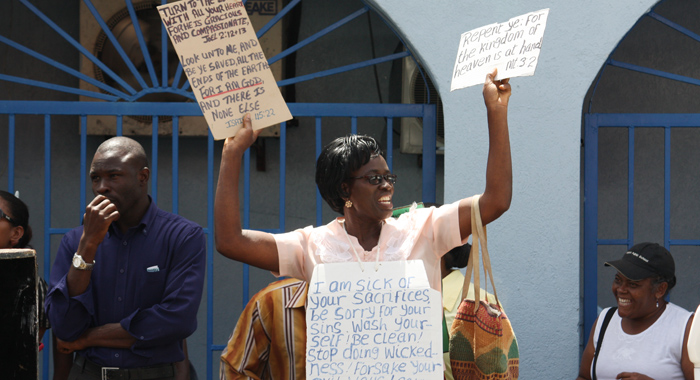 A woman holds placards with Scripture verses written on them at the National Day of Prayer Rally in Kingstown on Monday, June 10, 2013. (IWN photo)

A small crowd gathered in Heritage Square, Kingstown from midday Monday in public prayer for the nation, as part of the National Day of Prayer.

And, as the prayers were said, the crowd, which sheltered the sweltering heat under National Lotteries Authority tents, responded with utterances of “Yes, Lord” and “amen”, the intensity of which reflected the passion of the persons leading the prayer.

The rally, which was held under the theme “Men ought always to pray”, heard addresses from Prime Minister Dr. Ralph Gonsalves, Opposition Leader Arnhim Eustace, and Minister of Ecclesiastical Affairs, Maxwell Charles.

Charles said it is always a good thing when a nation can pause to recognise God.

He noted that the theme is taken from Luke 18:1 and said people must speak to God as a friend, and he described prayer as the vital link between God and man.

“Let us not destroy that link, but let us today, in our prayer, or in our relationship with God, establish or re-establish that vital link,” Charles said.

He said Luke 18:1 is a prelude to the parable that Jesus told of a judge who feared neither God nor man but budged because a woman continually came to him with her petition.

“St. Vincent and the Grenadines, … I want to announce proudly today to say that God is willing to hear our prayers. But we need to rid ourselves of wilful sin…” Charles further said.

“But we are called upon today to recognise his holy presence and see to it that we communicate with him on a daily basis.”

Charles urged the nation to trust God even in the face of its many problems.

“The heavenly intelligences are willing and ready to co-operate with all Vincentians. We must discern the presence of these holy agencies. Ladies and gentlemen, prayer is a good thing to bring God on-board in this, our nation.”

Charles said that a pastor led devotions at his Ministry Monday morning and the clergyman urged that the civil servants take their profession seriously, depend on God, and said it would be a good thing if everyday at the work place could begin with prayer.

“I want to expand that by saying that we need to start the day, as a nation, … with prayer in our families,” Charles said.

He further said there is no way that public servants can treat the public badly if each ministry and department begins each day with prayer.

“This day, our National Day of Prayer, I want us to take God seriously, as a nation. Let us make prayer not something on the wayside, but let us make it an indispensible necessity knowing that God is the god of this nation and we are simply stewards to carry out his bidding here on planet Earth,” Charles further said.

Meanwhile, Pastor Caldon Charles said in a sermonette that prayer should be continual and God must not be approached as a quick fix, or as one’s favourite fast food.

“God is not a convenience store,” he said.

He said that whenever God is removed from the equation, one is on a wrong path and further stated that all of this country’s problem are because of its spiritual condition.

‘… We can sit down and plan but the problem lies in the heart of man,” he said, noting the Bible book of Jeremiah’s statement that the heart of man is desperately wicked.

The preacher urged prayer for the nation and told listeners to consider what would happen if Christians unite in prayer for St. Vincent and the Grenadines.

2 replies on “Small crowd rallies in prayer for nation”