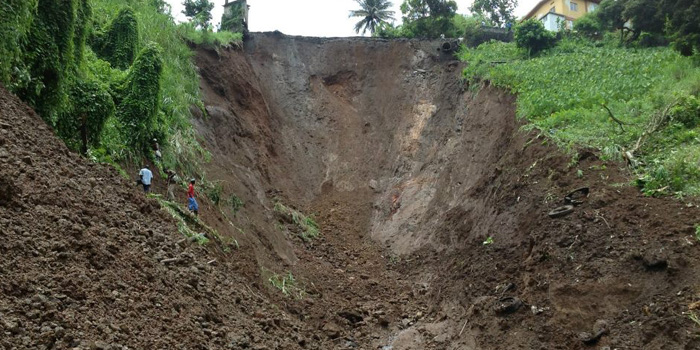 The road was damaged by a large landslide in September 2013. (Photo: CWSA)

Water supply to 11 communities has been disrupted and vehicular and pedestrian traffic rerouted after a huge landslide on Monday damaged water mains and the main road in Belmont.

The company further said it will truck water into the areas and several temporary tanks have set up during the three or four days it would take to restore the water supply.

And, the National Emergency Management Organisation (NEMO) has urged the harvesting or rainwater, even as it noted that that rainfall could further destabilise the area where the landslide occurred.

“I m going to begin first by reminding persons that this is the hurricane season,” Howie Prince, director of NEMO said at a joint press conference with other state agencies on Tuesday.

“What he had (Monday) night was the result of, so to speak, a small portion of a tropical wave that is moving around the region — not moving a lot but producing heavy rainfall, particularly in the mountainous areas of St. Vincent,” he said.

He urged citizens to continue to monitor the weather and to ensure that their plans for the adverse effects of and the fallout from bad weather are in place.

Chief Engineer, Brent Bailey, said that while the slippage “is pretty small — it is only about 50 or so feet [wide]”, and his office had not as yet the full information, it is estimated to be more than 150 feet high.

“Now, the repair is going to take some time. This is not something that is not going to happen overnight, simply because of the extent of the slippage,” he said.

He noted that the relevant state agencies had already mobilised resources to upgrade alternative roads, which could cause some EC$75,000.

“So we are going to have to look at a methodology to safely protect the lower embankment of that road and as well see what works we have to do to get the road back to its initial stage. More than likely, it will require realignment of that section of road,” he said, adding that total repair could take as many as eight months.

“I will ask that the public do not use that road,” Bailey further said noting the possible danger.

“I know there are lots of sightseers that would want to see what has happened. I wish to caution you because the area is not safe,” he further stated.

“The rate at which the embankment is deteriorating, and the rate at which it fell [Monday] night, if that is to be used as an indication, it could collapse at any point and as such we do not want the public to put themselves at risk,” he said.

We do not want any loss of life, given that we already know what is happening,” Bailey further emphasised.

Meanwhile, Garth Saunders, general manager of CWSA, said that 160 feet of 6-inch water main has to be replaced and that this will also require some reconstruction, a process that would take three to four days.

He said that the CWSA is trucking water into the area and has set up six storage tanks in the area and will decide, with time, if more tanks are needed.

“That is likely to be the situation in the next three or four days. We will like to bring it in before then, but, again, it depends on the stability of the area that we are working in,” Sunders said, noting the possible that the situation could worsen.

The Ministry of Transport, Works, Urban Development and Local Government would like to inform the general public that the section of the Vigie Highway at Ginger Village Junction between Belmont look-out and George Williams’ shop would be closed to vehicular traffic until further notice.

DIVERSION: Motorists travelling into Kingstown are asked to use the Fair Hall main road from George Williams’ shop and exit on the Windward Highway at Calliaqua.

Motorists travelling to Mesopotamia should turn right onto Whim road then left onto the Fair hall main road.

DRIVERS OF HEAVY TRUCKS AND HEAVY EQUIPMENT SHOULD USE THE FAIRHALL MAIN ROAD. THEY ARE NOT ALLOWED TO USE THE WHIM BY PASS ROAD.

Motorists are requested to exercise caution, adhere to the 20 mph speed limit and pay attention to the various road signs.

(This story was updated at 08:35 ECT to give a clearer indication of the traffic diversion)