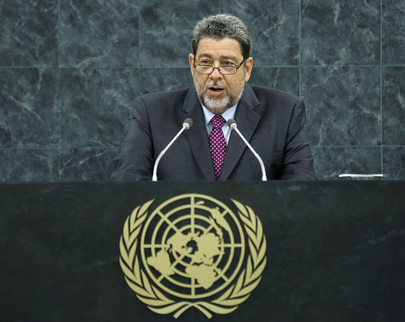 The developed world is to be blamed for the failure of the international community to reach Goal 8 of the Millennium Development Goals (MDGs), he told the General debate of the 67th Session of the U.N. General Assembly in New York.

The eight MDGs — which range from halving extreme poverty rates to halting the spread of HIV/AIDS and providing universal primary education, all by the target date of 2015 — form a blueprint agreed to by all the world’s countries and all the world’s leading development institutions.

“Our collective failure to achieve the Millennium Development Goals is largely rooted not in the shortcomings of earnest and hard-working developing countries, but in developed countries’ abject abandonment of Goal 8, titled ‘Develop a Global Partnership for Development’,” Gonsalves said.

He said the U.N.’s own MDG Gap Task Force noted that the quest for such a global partnership experienced “significant backsliding” in 2013 and that “the political momentum for advancing international development cooperation seems to have waned.”

He further stated that 16 of 25 developed countries decreased their aid budgets last year, and Official Development Assistance (ODA) contracted for the second consecutive year, the first such contraction since the creation of the MDGs.

“In a time of crisis, when assistance is most needed, ODA is itself in a deep and prolonged recession. The twists and turns by so many developed countries on this issue have been most disappointing,” he said.

“Without predictable flows of meaningful, non- discretionary assistance, the post-2015 development programme will remain, substantially, a fleeting illusion to be pursued, but rarely, if ever, attained,” he further stated.

Gonsalves, however, applauded the efforts of the developed nations that take their commitments on ODA seriously.

“I hail, too, a raft of other countries which are in a genuine developmental and functional partnership with us,” he said, mentioning Trinidad and Tobago, Cuba, Venezuela, and Taiwan.

St. Vincent and the Grenadines is among a handful of poor and underdeveloped countries in the Caribbean, Central American and Africa that recognise Taiwan as a country independence of China, which considers it a renegade province.

“Surely, the time has now come for this exemplar of the magnificent Chinese civilisation to be permitted to participate fully in the work of the various agencies of this world body,” Gonsalves said of Taiwan.

Gonsalves spoke of the on-going global economis crisis and said, “The global economy remains precariously poised, and for every nation that seems to have turned the corner, another one plunges back into recession.

“The impact of the crisis on development has been palpable, and has rendered the MDGs unattainable in many countries.

Development agenda, we must also discuss the reform agenda of our outmoded international financial architecture, whose failings contributed to the current crisis, and whose continued stasis is a reckless invitation to future economic turmoil,” Gonsalves said.