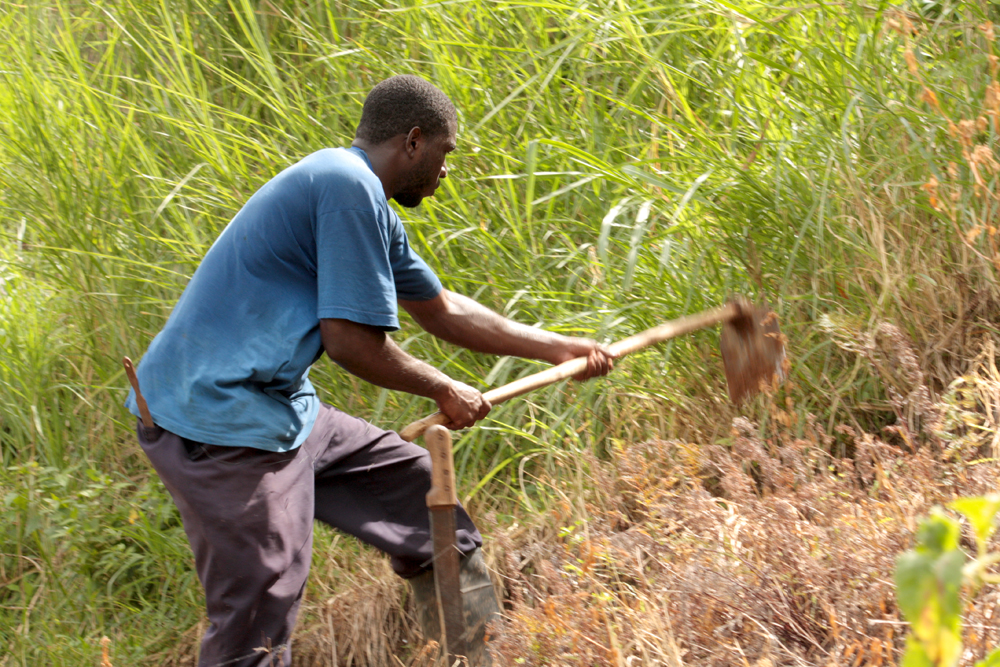 Family farmers produce the majority of food for local consumption in the region of Latin America and the Caribbean. (IWN photo)

(Editor’s note: This article was first published in the I-Witness News Independence e-magazine. The magazine can be downloaded here, free)

Like most 23-year-old Vincentians, Elroy Foster has a smartphone. However, unless he is expecting an important business call, he often leaves it at home when he goes to work, since he is tempted to check it whenever it gives a notification.

This graduate of the Technical Division of the St. Vincent and the Grenadines Community College, who is trained in mechanical technology, is a farmer.

And since the work is labour intensive, he avoids mobile device distractions such as unimportant messages and contacts just trying to chitchat.

Foster says he has been in agriculture all his life but took up full-time farming only four years ago, after graduating from the post-secondary institution.

“I am a fourth generation farmer — my great grandfather, my grandfather, my father and now me,” he explains as he walks on his family’s 15-acre farm in the interior area of Belair.

On “Debique Acres,” as it called, Foster and his father grow root crops and fruits and vegetables. As well, they raise cattle, sheep, goats, pigs and chickens.

“We’ve farmed for many years. So as a young boy growing up, you had your little sheep and goat and so on. Eventually, you grow into it and you realise this is something that you actually love and you continue doing it while making a living for yourself,” Foster says.

After graduating from college, Foster applied for jobs at several companies, while continuing to farm part-time.

However, he said, the job market was “really, really tough” and he decided to go back to the land full time.

“Why fight up with a job when I can be self-employed and even employ some others?” he asked rhetorically, beads of sweat running down his face on a humid mid-October morning.

Three of his employees — two women and one man — work diligently under the cloudy sky, pulling weeds from a bed of chives.

Foster says he employs between three and four persons, intermittently.

Although unemployment is a major problem in St. Vincent and the Grenadines, it is not easy to find persons who are willing to work on the farm, he says.

Foster has decided to go into agriculture at a time when experts in the Caribbean are expressing concerns about the future of the sector, in light of the fact that the average farmer in the region is over 50 years old.

The young entrepreneur has had to cope with derision by some of his peers over his decision to continue his family’s farming tradition.

“…they will say, ‘You went to secondary school; you went to college.’ They look at it as a dirty job,” Foster says.

“Nothing is easy,” he says. “I like the hard work because it makes me feel a sense of worth — working for your own money and doing it honestly.”

But not everyone in St. Vincent and the Grenadines shares Foster’s respect for the values of hard work and honesty.

Praedial larceny is a real challenge for the nation’s farmers, although Foster says that theft of produce is not a problem on his farm.

Other challenges include the price of fertilizer, which “keeps going up,” Foster says.

Pests and diseases are not a major problem, he says. The most common issues are grubs eating potato tubers, the armadillo — a non-native mammal that was introduced into the country some decades ago — that burrows into the earth and eats root crops, and diseases such as leaf spot and black sigatoka that affect plantains, he explains.

Farmers in the region are also susceptible to losses from natural disasters such as Hurricane Tomas, which destroyed most of country’s banana cultivation in 2010.

The storm wrecked Foster’s sheep pens and pigsty and damaged some of his fruit trees.

Notwithstanding the challenges, Foster says, he will continue farming.

“It is something that I have grown into. Yes, there will be challenges in it, but I have decided to farm. I will always be a farmer.”

He sees his efforts as an important contribution to the development of the country.

“I am helping with the economic growth of the country in terms of producing food, and some of the food gets exported, so I am a part of helping to develop the country as a whole.”

The Ministry of Agriculture has been holding workshops and trying to enlighten farmers about the importance of their role in food security, he says.

“We need to produce more,” he says, mentioning also a need to practice good farming habits, comply with the rules, and reduce the use of chemicals.

Another dimension of farming that inspires Foster is the land to table concept.

“I try to eat mostly what I grow. And it helps to save money, in terms of buying a lot of stuff by the shop. And then, sometimes, you don’t even know what you are eating because a lot of that stuff is produced using a lot of chemicals. When I grow my stuff, I know what I produce, so I feel more comfortable eating what I produce.”

Like most businesspeople, Foster is tight-lipped about how much money he makes from his enterprise, but is confident that he has a financially secure future as a farmer.

He thinks that in the next five years, he will be well on his way to success.

“I see myself cultivating more lands and achieving certain things, like a house and family and these things. It is quite possible, if I work hard enough,” he says.

He also sees farming as a worthwhile pursuit for other young people in the country and a means of earning some quick cash.

“There is a lot of waste (idle) land in the country. So youths who are unemployed, start to do something; grow some vegetables. You don’t have to do the root crops. Vegetables [take] only six weeks [to mature], so you can make some money instead of being on the block (roadside) not making anything,” he says.

While many youths may see farming as hard, unattractive work, Foster has some encouraging words for them.

“Farming is like this: whatever you put in is what you get out. So, it can be quite rewarding at times.”

4 replies on “Facing a tough job market, college graduate returns to the land”