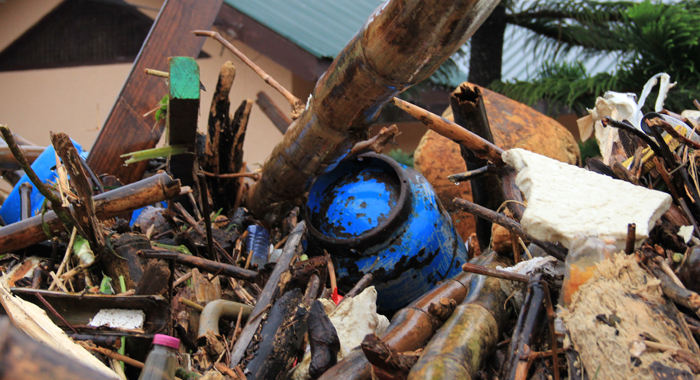 LPGs cylinder and other debris are deposited outside a house in Cane Grove. Prime Minister Ralph Gonsalves has called for generosity in the distribution of disaster relief. (IWN photo)

Those distributing relief items to persons affected by the Christmas Eve trough system are being told that it is better for persons not affected by the disaster to benefit from relief that for those affected not receive.

“I have told Howie Prince [director of the National Emergency Management Organisation – NEMO] something I see has seeped into the relief effort: too many persons who are involved spend too much time on saying that this group of people taking advantage of the disaster and they shouldn’t be getting this, they shouldn’t be getting that,” Prime Minister Ralph Gonsalves said at a press conference on Monday.

(Read also: Fridges, stove, mattresses to be provided to victims of Christmas floods)

Gonsalves said that some public servants spend “a disproportionate amount of time” in denying some people.

“Well, those persons are also in the same vulnerable area, and they are also vulnerable or poor. So what are you going to penny-pinch about with that?” he further said.

“And I want the guiding principle that we must err on the side of generosity and love. That is the side I want us to err on, and not err on the side of being miserly. That is not the spirit of this government and that is not the spirit in which people who are giving us would expect to respond. So I just want to say that as a principle of operation and I hope all the public servants hear me on this,” Gonsalves said.

Nine persons died, while three are missing as a result of floods and landslides triggered by the trough system.

Some 495 houses have been damages, 14 bridges destroyed and 14 damaged, in addition to other damage to public infrastructure, including the road network, Gonsalves told the press conference.