Gonsalves tells ULP supporters get ‘on your marks’ 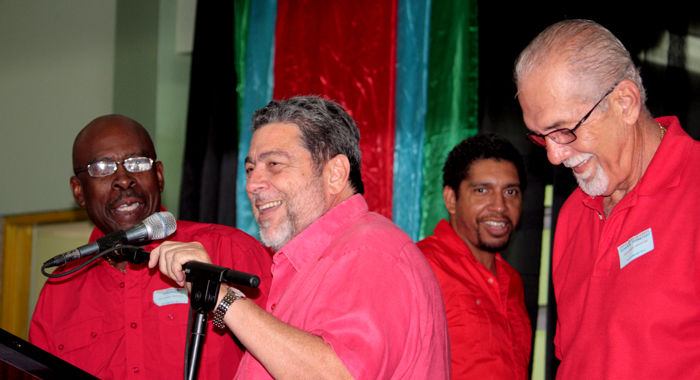 Prime Minister Ralph Gonsalves has signalled that elections will be held ahead of the 2015 constitutional deadline and told party supporters on Sunday, “on your marks”.

Speaking at the 20th annual convention of the Unity Labour Party, party chairman, Edwin Snagg, suggested that there could be snap elections as the ULP seeks a fourth consecutive term in office.

Snagg said that while, traditionally, a race begins with “on your mark, get set, go”, ULP supporters could hear “On your marks, go!”

But Gonsalves, the political leader of the ULP, gave only the “on your marks” order as he addressed the convention at the Campden Park Secondary School.

He spoke about his party’s accomplishment since coming to office in 2001, and its vision for a fourth term, but also spent much of his two-hour address saying why he thinks the main opposition New Democratic Party, which holds seven of the 15 seats in Parliament, is not fit to govern the country.

The Prime Minister said Opposition Leader, Arnhim Eustace, who is embroiled in a saga over severance pay for his former secretary, Rishatha Nicholls, who he fired last year, cannot manage his office, which has a staff of three, much more the country.

Eustace has been at the helm of the NDP when it lost the 2001, 2005, and 2010 general elections, and Mitchell has publicly criticised his leadership and has called for him to step down as head of the NDP.

Among the audience at the convention was NDP member, political activist Frank Da Silva, a close ally of Mitchell, who has also publicly criticised Eustace’s leadership.

Da Silva entered to cheers while the convention was already underway and walked up to the head table and handed two books to Gonsalves.

He later sat among convention delegates and supporters, and applauded loudly as Gonsalves criticised Eustace’s leadership.

It was the second time in months that a prominent member of a political party here attended the convention of another party.

In November, Luzette King, a Washington-based Vincentian political activist, delivered the feature address at the NDP’s convention, during which she boasted about her ULP membership.

The ULP later said that King’s membership had been revoked and that she was not a member of the ULP when she delivered the address.

In making the case for re-election of the ULP, Gonsalves said SVG is the only Organisation of the Eastern Caribbean States’ nine members that registered economic growth in both 2011 and 2012.

He said the estimated 2 per cent growth in 2013, exceeded the projected 1.5, and added that he believes the same will happen again this year, when growth is projected at 2.5 per cent.

“But, you got to vote. You got to organise. I tell you this: the NDP, even without James Mitchell supporting them, even without Frank Da Silva making the case for them, might still reach in the region of 40 per cent of the votes.

“Can’t tek no chance. You can’t stay home. When the bell rings, you have to come out and vote,” he said.

Gonsalves said the NDP, will roll back many of his administration’s social programme, mentioning among these the “Home Help for the Elderly” initiative, which the NDP has repeatedly said it believes is a good programme and supports.

The Christmas floods and the resulting approximately EC$330 million in damage and loss, and the nine dead and three missing persons, also featured heavily in Gonsalves’ speech.

He had previously said that there are six Rs — relief, reconstruction, roads (including bridges), river defences, reforestation, and relocation (including housing) — as the nation rebuilds after the storm.

“But what frightens the NDP with those six Rs is not those six Rs, you know. The seventh ‘R’ they talking about is re-election. And the eighth ‘R’ they are worried about is Ralph,” Gonsalves said.

The convention was held under the theme under them “On Yoh Marks!!! Forward to the Fourth Term. Let the Progress Continue.”

6 replies on “Gonsalves tells ULP supporters get ‘on your marks’”