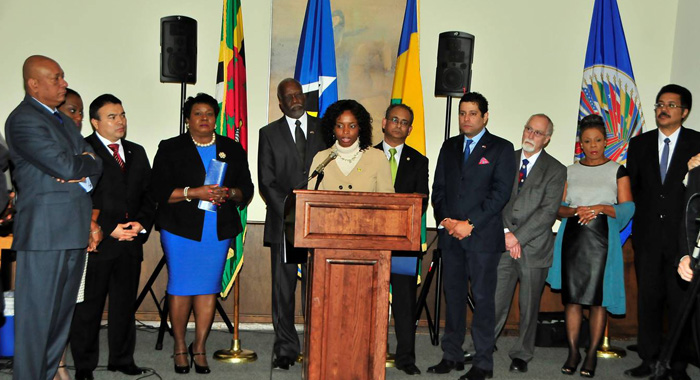 La Celia Prince, ambassador of SVG to the United States, speaks at the press conference in Washington.

WASHINGTON, DC — The Organization of American States has made an initial financial contribution of US$20,000 each to St. Vincent and the Grenadines, Dominica and St. Lucia, the three countries affected by the Christmas Eve trough system.

The donation was made a press conference held by the ambassadors and permanent representatives of the three countries to bring attention to their plight in the aftermath of the Christmas Disaster.

La Celia Prince, ambassador of SVG to the United States, noted that her country has a population of about 110,000 persons and said that more than 13,000 people, or 14 per cent of the population, are still reeling from direct impact.

“… the news of our plight got lost in the merriment and bustle of the holiday season. But there are people still in dire need and my country will be on a very long road to recovery,” she said.

The media conference, which was organized by the Embassy of St. Vincent and the Grenadines, also featured diplomatic representatives from other Caribbean countries and OAS Member States.

Ambassador Albert Ramdin, assistant secretary-general of the OAS, expressed solidarity with the affected member states and committed the OAS to assist with natural disaster mitigation and prevention projects through its sustainable development programmes.

He expressed the belief that “efforts to mobilize financial, material and technical assistance should continue beyond the emergency period.

“Often, the long-term social and economic impact does not receive the required attention,” Ramdin said.

The disaster left nine persons dead in St. Vincent, and three others still missing, with material damage — to agricultural crops and livestock, private property and public infrastructure including hospitals, police stations, bridges and roads — of up to US $100 million.

Prince and the ambassadors of St. Lucia and Dominica thanked the OAS, the institutions of the Inter-American system, the United States government, the private sector, as well as the international community for the assistance rendered and appealed for continued support during the recovery period.