Police to clamp down on defaulters of liquor license payment 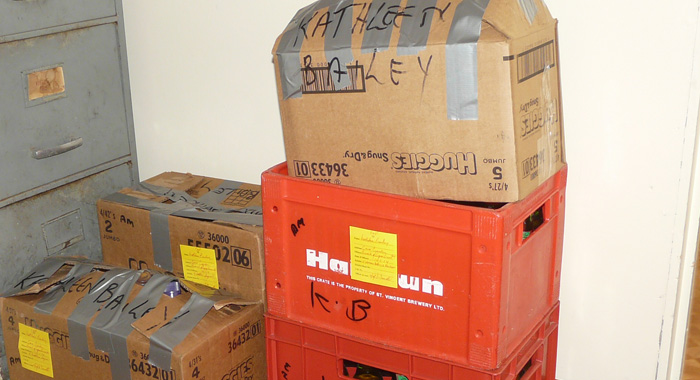 Alcoholic beverages seized by the police.

Retailers of alcohol, who default in paying their liquor license, will be prosecuted.

This warning is being issued by the Office of the Central Police Station (CPS), Central Division, Royal St. Vincent and the Grenadines Police Force, under whose portfolio checks are carried out to ensure people who engage in the sale of alcohol pay their liquor licenses.

The CPS said it is seeing a trend where there are too many defaulters of liquor license payment and as a result the police will be taking steps to clamp down on this situation.

The CPS said it is reminding the public that Volume 14, Chapter 473 of the Laws of St. Vincent and the Grenadines, section three, subsection one, warns that no intoxicating liquor is to be sold without a license.

“Any person who sells, exposes for sale or disposes of any intoxicating liquor without being duly licensed to sell the same, or any place or in any manner that he is not authorized by his license to sell the same, is guilty of an offense against this Act,” states Volume 14, Chapter 473 of the Laws of St. Vincent and the Grenadines, section three, subsection one.

The CPS expressed the view that some vendors believe that because they only sell beers they do not have to possess a liquor license for doing so, but this is a misconception.

All refreshment houses throughout St. Vincent and the Grenadines must have a liquor license for the sale of alcohol. A refreshment house under the law is described as “any house, room, shop or building kept open for public refreshment, resort or entertainment”.

On July 29, 2013, Pat Ralph of Walvaroo, was found guilty of an offense on Jan. 28, 2013, where she exposed for sale intoxicating liquor without being duly licensed to sell same.

On the other hand, Kathleen Baily of Cane Garden on Jan. 21, 2014, was found guilty of an offence at Middle Street, for being a registered liquor license holder failed to pay her license while selling alcohol.

The CPS is also advising businesses with the wrong liquor license to get this corrected.

There are cases where a restaurant may have a Class 3 license when it should actually have a Class 6 or 8 licenses, the CPS said.