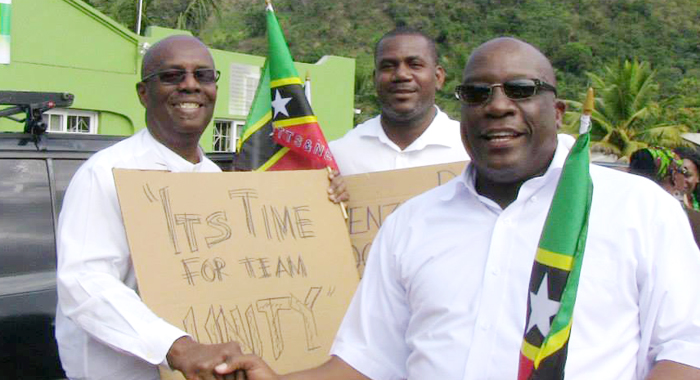 St. Kitts and Nevis Prime Minister, Denzil Douglas on Monday accused his former cabinet colleague, opposition lawmaker Timothy Harris of having an “insatiable desire” to become his country’s prime minister, without going through the proper procedure.

Harris, a former minister of foreign affairs in the Douglas government, who now sits on the opposition benches, arrived in St. Vincent and the Grenadines (SVG) last week ahead of the two-day CARICOM heads of Government summit, which ends here on today (Tuesday).

Harris joined with his opposition colleagues in SVG in staging a picket along the route to Buccament Bay Resort on St. Vincent’s southwestern coast, where the summit is being held.

He told I-Witness News last week that he is in St. Vincent to call regional attention to the political situation in Basseterre, where six of the 11 elected members of parliament no longer support the government.

The opposition has failed for the past 14 months to have a motion of no confidence in the government debated in Parliament, and has gone to court over the situation.

Harris, along with Opposition Leader in SVG, Arnhim Eustace, held a joint press conference about half mile away from the summit venue. on Monday.

“I am in Birmingham because injustice is here. Just as the prophets of the eighth century B.C. left their villages and carried their ‘thus saith the Lord’ far beyond the boundaries of their home towns, and just as the Apostle Paul left his village of Tarsus and carried the gospel of Jesus Christ to the far corners of the Greco Roman world, so am I compelled to carry the gospel of freedom beyond my own home town. Like Paul, I must constantly respond to the Macedonian call for aid,” Harris said.

“When we see our brothers and sisters suffering anywhere around the world, we should always hear them, and speak with one loud, clear voice and act to end their plight,” he further said.

He said that when this “suffering” reaches the Caribbean, “we should not hesitate to act with deliberate haste for the sake and in the spirit of our ancestors who bled and died for the rights and freedoms that we now enjoy today”.

Meanwhile, the Vincentian Opposition Leader said St. Kitts and Nevis “is under siege”.

“Democracy in St. Kitts and Nevis has been compromised for nearly 15 months. Kittitians and CARICOM nationals in general are confronted with the most undemocratic of absurdities: a minority Government,” said Eustace, who is head of the New Democratic Party.

“This tear in the Kittitian political fabric threatens to unravel the CARICOM and OECS sub-regions. For the much-vaunted democratic integrity of our region — and sub-region — is only as strong as it is vibrant in our weakest member. Our disordered fraternity instead concerns itself with the state of democracy in Venezuela and even more remotely, in the Ukraine,” Eustace said.

But Douglas on Monday dismissed the efforts by opposition legislators.

“They know that what is happening in St. Kitts is obnoxious and is bad and is unacceptable and they ought to do the right thing,” he told I-Witness News.

He said Harris has connived with the opposition “through the motion of no confidence to bring the leadership of the labour party to an end and allow that leadership to pass on to him. Of course he failed.

“The democratic way of doing that is to contest the leadership of the labour party and then of course, if possible, become the prime minister of the country. Failing to do that he has brought to some extent, quite a bit of unnecessary rancour on himself because of his continued quest to become the prime minister of St. Kitts-Nevis without going through what would be the normal procedures of the party,” Douglas said.

“What we are seeing here in St. Vincent is just another demonstration of Harris’ insatiable desire, his power craze to become prime minister of a country, without going through the procedure,” He told I-Witness News.