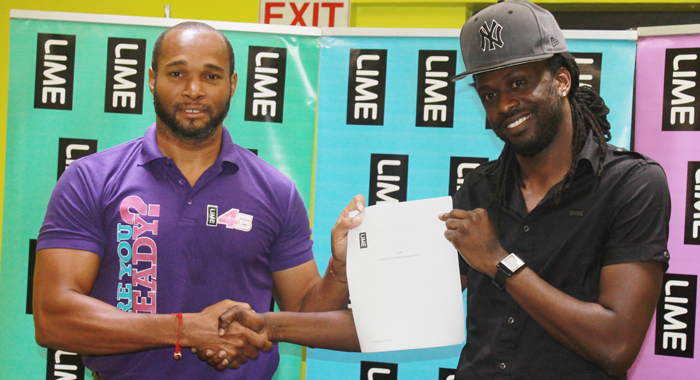 “I’d like to say it’s a finally pronounced relationship, we’ve been dancing for quite a while almost like my ‘outside girl’ but at some point in time you have to make things official, and you have to kind of see the vision of those who see your vision,” Skinny Fabulous said a ceremony on Wednesday, where the agreement was signed.

The signing signals Skinny Fabulous’ official affiliation with the 4G Ready LIME brand, which the company says will be launched in the coming weeks.

“I’m certainly excited to be a part of my new family,” the entertainer, whose real name is Gamal Doyle

The “Soca General” will join other local artistes and DJs who would lead the LIME 4G charge during the 2014 Vincy Mas season.

Doyle said that the move to LIME was a bold and proud venture for him and his team, which includes producer Alex “Kobayashi” Barnwell, Karen Veira and that the step was a move in the right direction for himself and the LIME brands.

“This is the time where we seek collectively a new path, and that new path is actually 4G path; its now bigger, better, faster and one of those Gs in 4G stands for ‘Gamal.’ So this is not a timid move for me …. I am very excited to be a part of the 4G Movement.”

The entertainer said that fans can look forward to new music from the team in two weeks time.

Meanwhile, LIME General Manager, Leslie Jack said he anticipates a very exciting future for LIME and Doyle and his team as he welcomed the entertainer to the LIME family.

Jack said that carnival and LIME fans can expect more surprises as the company prepares to launch its 4G and 2014 Vincy Mas package.

“I think everybody knows of the exploits of Skinny over the last five to eight years. I think this year he has certainly stepped it up a notch. Despite carnival in St Vincent not being here as yet, he has certainly represented SVG very well throughout the Caribbean and internationally, and going forward he will also be representing LIME specifically as well, locally, regionally and internationally as he goes out there and continue the many exploits.”

“With LIME there is always some surprise, and we try as best as possible to keep them sealed until that particular time,” Jack further said.

He said his company has not made all of the announcements regarding 4G and the carnival just yet.

“There are quite a few more that will be rolled in the coming weeks, so Vincentians can expect More from LIME 4G carnival,” Jack said.

One reply on “Skinny Fabulous is now a LIME ambassador”