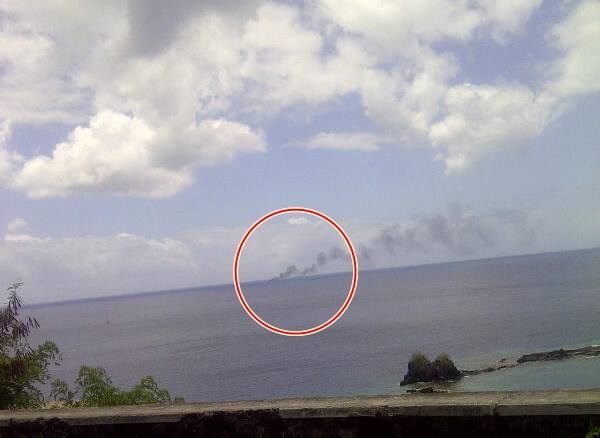 Smoke rises from what is believed to be a burning vessel at sea off Buccmanent on Wednesday. (Photo: Jerry S. George/Facebook)

The body of a man carrying a British passport was found at sea on board a partly burnt life raft on Wednesday afternoon, police say.

Police have identified the man as 53-year-old John Edward Garner.

Police received reports approximately 12:30 p.m. that a yacht was on fire at sea off Buccament.

The Coastguard Service responded immediately to the report, and Garner was found with injuries to both of his legs as well as his head.

He was rushed to the Milton Cato Memorial Hospital, where he was pronounced dead, police say.

Police say the yacht is believed to be the “ASANTE”, which was registered in Gibraltar.

Debris and oil spill were discovered at sea, where police believe the yacht sunk.

Preliminary investigations show that Garner and Heidi Hukkelaas, arrived in St. Vincent and the Grenadines on Jan. 19, via plane, police say.

They were granted an extension to remain in the state no longer than April 19, 2014.

Police say the whereabouts of Hukkelaas are unknown, but checks revealed that she did not leave the state at any of the airports or seaports, police further said, adding that there investigations are on going.