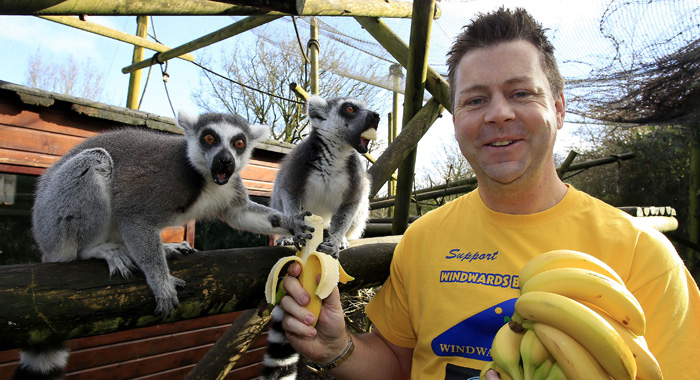 Opposition Leader Arnhim Eustace is calling for change in the performance of St. Vincent and the Grenadines (SVG) consulates around the world.

He made the call in his radio programme last week as he objected to Honorary Consul for St. Vincent and the Grenadines to Northern Ireland, Christopher Stange, presenting bananas from SVG to a zoo in Belfast, Northern Ireland.

In a press release on Feb. 24, Stange, who is also chair of Fairtrade Belfast, said Fairtrade bananas from SVG were the dish of the day for some very lucky ring-tailed lemurs at Belfast Zoo.

The release said the donation of bananas “brought Caribbean sunshine and media attention” during the launch of Fairtrade Fortnight 2014.

The campaign for 2014 focuses on bananas and the necessity to pay producers in countries such as the Windward Islands a fair price for their harvests, by having supermarkets stop unsustainable pricing policies that are endangering developing world farmer’s livelihoods, the release further said.

“St. Vincent farmers have been hit twice with Hurricane Tomas and then Black Sigatoka. Bananas are an important part of the economy and fabric of life, including Fairtrade exports.

“The SVG Consulate has increased the supply chain to Northern Ireland, recently being appointed the Secretariat of the All Party Group on Fairtrade at Stormont Parliament, to facilitate the campaign to make Northern Ireland a Fairtrade country. This initiative will dramatically increase procurement, supply volume and market expansion of Fairtrade commodities for farmers,” the release quoted Stange as saying.

Belfast Zoo, which is owned by Belfast City Council, is investigating sourcing Fairtrade produce for its animals when the tender comes up for renewal as over 70,000 bananas alone, are used annually at this single location, the release further said.

But Eustace objected to the effort, saying, “I don’t know how that is in our interest. Here we are talking about the rehabilitation of our bananas and our consulate is saying he is selling bananas to the zoo in Ireland, Fairtrade bananas as that, when we have not recently exported any Fairtrade bananas…

“We gotta be serious about the business of this country,” siad Eustace, who is also a banana farmer.

“I don’t believe they are our bananas, because we have not been exporting Fairtrade bananas. And this is the kind of thing that can’t do us any good. These are issues that we must handle and deal with them properly. Our image, our international image is important,” he further said.