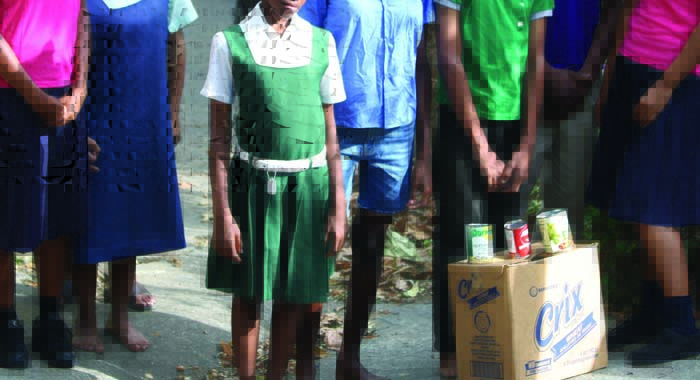 The Intermediate High School’s (IHS) RBC/RBTT Young Leaders assisted a number of their less fortunate peers with the distribution of food supplies on Wednesday.

The food supplies, mostly canned items, were given to eight families. The canned products were the proceeds of an April 5 charity event dubbed “Yes we can fest”, held by the IHS Young Leaders at the school at Mc Kies Hill.

The “Yes we can fest” and the food distribution are part of the group’s 2013/2014 RBC/RBTT Young Leaders project, and compliments the Young Leaders’ breakfast programme, which feeds the school’s less fortunate students.

“We wanted the food distribution to go directly to their homes to benefit them as well as their entire household,” Young-Compton said.

The group’s president, Orlicia King, said they were very excited to make the donations.

“We are glad that we can help those who need it,” she said on Wednesday while handing out supplies in Buccament.

Meanwhile, one of the recipients of the assistance, a woman in Central Leeward, said that they were grateful for the supplies.

“We are very happy. There are four kids here and it’s hard sometimes. I’ve tried to get a job on numerous occasions, and can’t. So we are grateful to the Young Leaders,” she said.

“This is very important to us because I have real difficulties in providing, and sometimes the children can’t have three meals a day.”

She added that while the family is grateful for the EC$200 a month that the public assistance programme gives, it cannot meet their needs.

The IHS’s 2013/2014 RBC/RBTT Young Leaders launched their project at the school in February.

This year schools are doing their project under the theme, “Diversity, the 21st Century Imperative”.