Opposition Leader remained silent when told constituent would be murdered 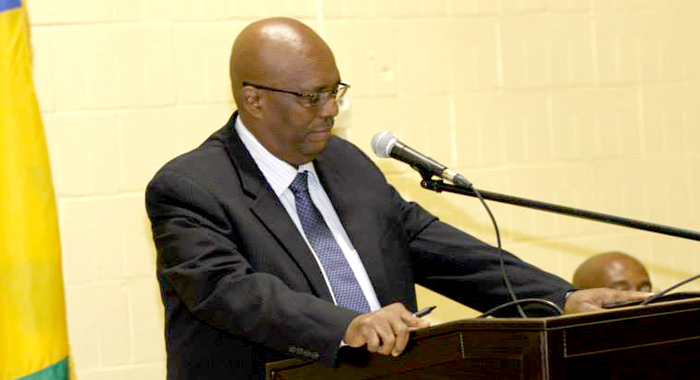 Leader of the Opposition Arnhim Eustace has defended his decision not to report to police information he received indicating that one of his constituents would be murdered.

The bullet-riddled body of 25-year-old Roger Bramble, a resident of Sion Hill, an East Kingstown community, was found on the banks of a stream in Brighton on April 14, two days after resident heard a barrage of gunshots in the area.

Speaking at a town hall meeting in Brooklyn on Saturday, Eustace said he had been told the young man would be killed, and defended his decision not to communicate that information to police.

It was the second time that he was revealing the information, which he first mentioned in Canada a week before, triggering in a barrage of criticism from supporters of the ruling Unity Labour Party.

“I made mention of that when I spoke in Toronto. I understand that the ULP radio down there (in St. Vincent) cussing me saying I shoulda report to the police,” Eustace said.

“Let me tell you what happen. For the first time in my life, I was told that a young man in my constituency would not live beyond the weekend. … That is the first time I was hearing anything like that. It turns out that he had shot at somebody elsewhere in the constituency and the fellas had started to come around Sion Hill in some car with army fatigue on, looking for him,” Eustace said.

He said that the Thursday before the killing, he received a telephone call advising him not to come to Sion Hill, a community in East Kingstown, whihc Eustace represents in Parliament.

“When I went on the block where Knight’s Supermarket is, all the fellas gone home already [at] five-something in the afternoon. When you see that, you know something wrong, fellas protecting themselves,” Eustace said.

“But I still didn’t believe that it would come to that. By Saturday (April 12), that young man was dead. He got six bullets. So, the people knew what they were saying,” he further stated.

“They (ULP supporters) are now down there running off their mouth, saying I shoulda go to the police. Somebody tell me something, that is evidence for me to go to the police?” said Eustace, a former prime minister.

“But that is not the point. The point is that too often we are having too many killings in St. Vincent and the Grenadines and some of them are most heinous, he said, mentioning a case in which a man was thrown into a cauldron of boiling water a few years ago.

“We have some very harsh crimes in St. Vincent and the Grenadines, and we have put forward a social and spiritual redemption charter to the Parliament to deal with that kind of crime, which we cannot get debated in Parliament since 2003, which goes into policies and programmes to deal with our young people,” Eustace further said, of the New Democratic Party policy on crime prevention.

“Every time they go to Parliament the government wants to change the motion so that they won’t have to vote on it,” he further said.

SVG has recorded 15 homicides so far this year, and guns were used in at least 10 of these killings.

The latest victim is 36-year-old Ricardo Mattis, whose body was found in his house in Campden Park.

The deceased received gunshot and stab wounds as well as a cut to his throat.