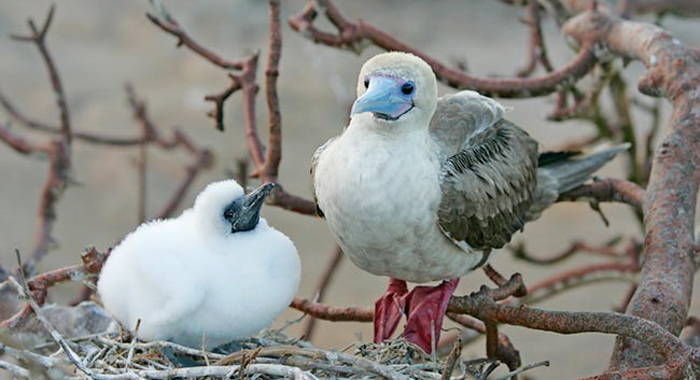 Battowia is the largest nesting place regionally for the red-footed booby. (Internet photo)

St. Vincent and the Grenadines joined the world in celebrating International Biodiversity Day on Thursday with an exhibition at Heritage Square Kingstown under the theme “iAm Biodiversity”.

Speaking at the event, Minister of the Environment, Clayton Burgin, hailed the nation’s role in the procreation of the red-footed booby (sula sula).

Burgin said that the multi-island nation is home to numerous endemic plants and animal species such as the National Bird, the amazona guildingi, the black snake, the whistling frog, the whistling warbler and the green lizard.

He, however, pointed out that the uninhabited Grenadine island, Battowia, is of global importance to biodiversity as it is possibly the largest nesting regionally for the red footed booby.

More than 3,000 nests can be found on the island during nesting season, Burgin said.

He further said that the Tobago Cays is one of the most world’s most pristine locations for locals as well as regional and international tourists, where sea creatures can be seen in their splendour.

“Biodiversity is also critical to the livelihoods of many Vincentians where ecotourism, fishing, agro-processing, and arts and crafts provide the basis of income for many households,” Burgin said.

Burgin said this year’s international theme — “Island Biodiversity” — places the spotlight on the many islands around the world, including the Caribbean islands, as their importance is acknowledged.

“The world’s islands are regarded as amongst the planet’s most fascinating and beautiful places. They are special gems and home to some of the most globally biologically diverse ecosystems, with large numbers of endemic, creatures, flora and fauna. They host 30 per cent of the world’s biodiversity hotspots, 50 per cent of marine tropical diversity, and some of the world’s most unusual and rare species, many of which are still unknown or remain to be discovered,” Burgin said.

“The Caribbean also ranks high on the Global scale for a number of extinctions of species,” he added.

He further noted that like many islands around the world, SVG is environmentally fragile.

“And in the light of all the imposing pressures from human activities, these also give rise to it being economically vulnerable.”

Burgin noted that the unsustainable use of resources has many implications that directly and indirectly threaten the livelihoods and health and well being of all Vincentians.

“The indiscriminate cutting of trees not only leads to a loss of habitat for many animal species, it also leads to land degradation, soil erosion, floods and other disasters, as well as more concentration of carbon dioxide in the atmosphere. Land base sources of pollution are eventually deposited into the rivers and seas and affect the health of aquatic and marine ecosystems.

“The destruction of mangroves leaves shorelines vulnerable to storms and hurricane winds, waves, and floods. It also restricts its other functions such as helping to prevent erosion by stabilizing sediments with their tangled root systems, maintaining water quality and clarity, filtering pollutants and trapping sediments originating from land as well as serving as a nursery for young fishes, etc. These practical examples are seen on numerous occasions throughout the island.”

The minister said his ministry, through its National Strategy and Action Plan, is trying to combat the negative actions taken by some citizens in destroying the nation’s valuable biodiversity.

“By mainstreaming biodiversity conservation and management, we can move forward with a more holistic approach geared towards conservation,” he said.