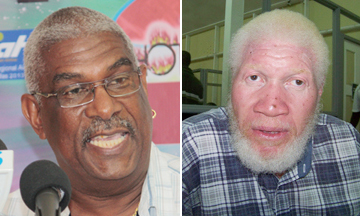 The Carnival Bands Association (CBA) has not filed an injunction seeking to stop the Miss SVG pageant on Saturday, chair of the Carnival Development Corporation (CDC), Denis Ambrose told I-Witness News on Monday, contrary to a report by at least one media house.

However, the CBA said separately on Monday that a” the chasm that has opened between itself and the CDC“, which has culminated in a CDC decision that the “services of the mas bands are not required for the 2014 Miss SVG Show”.

This means that contestants in the pageant, slated for this Saturday, will not wear Carnival costumes as they make their introductory appearance.

It is the second consecutive CDC event for Vincy Mas 2014, where carnival costumes will not be on display — the first being the launch of this year’s festival on May 3.

Chair of the CBA, Hugh Raguette, in a press release on Monday sought to explains the CBA’s position.

He said that the request by the CBA to pay carnival judges their 2013 stipend by May 31, has nothing to do with the Miss SVG pageant being held that day.

In an April 21 letter to the CDC, Raguette said that the deadline was given because it is “the penultimate month before the month which kick starts official carnival celebrations”.

In Monday’s press release, the CBA head said the mas bands have completed costumed for the eight contestants, and further accused the CDC of breaching its verbal contracts with the eight mas bands.

“Until recently the CBA and the CDC have co-existed in an atmosphere of mutual respect and understanding,” Raguette said.

He added that while his organisation does not always agree with the decisions taken by the CDC, “we also understand that the CDC operates under serious financial constraints and we do what we can to work with the corporation for the betterment of Vincy Mas on the whole”.

The CBA head said the CDC acknowledges that traditionally the CBA is the one carnival organisation that is always willing to work with them to ensure the success and improvement of Vincy Mas.

“What then caused the present furore which culminated in a CDC decision that the ‘services of the mas bands are not required for the 2014 Miss SVG Show’?” Raguette said.

He said that at a CBA general meeting in December 2013, the CBA reviewed that year’s carnival, noting in particular the state of CDC‘s finances and that for a second consecutive year, masquerade judges had not yet been paid.

At a CDC directors meeting in early February 2014, the CBA representative tabled their cost reduction proposals to the CDC.

By late March 2014, masquerade judges still had not received their stipends for 2013 Vincy Mas because the CDC was still running a deficit, Raguette said.

He said the CBA then decided it would be better not to have mas presentations in the launch of Vincy Mas 2014, thereby saving the CDC the cost of appearance fees.

“It was hoped that this portion of the Vincy Mas launch budget would then be applied to the deficit and perhaps help to pay the mas adjudicators’ 2013 stipends,” Raguette, said, noting that it was reported in the media that the CBA was boycotting the launch of Vincy Mas 2014.

Raguette further said that at a CDC directors meeting on May 8, 2014 the CBA representative, as mandated by the CBA, requested an update of CDC finances and asked that the 2013 stipends due to mas adjudicators be made by May 31, 2014.

“Our representative was told that our request was improper and could not be made, at which point the mas representative informed the meeting of his withdrawal in protest until the 2013 stipends were paid,” Raguette said.

“In doing so, he explained the adverse impact non-payment of the 2013 masquerade judges’ stipend would have on mas participation in this year’s 2014 carnival celebrations especially if payment were not effected by the end of May 2014.

“For some unknown reason and despite the explanations given, the mas representative’s decision to withdraw from the meeting was taken to mean that the CBA intended to boycott Miss SVG Pageant 2014, which coincidentally takes place at the end of May 2014 on the 31st., by not providing costumes for the contestants.

“Without further discussion, clarification or consideration for the years of work that the CBA and the CDC have done together, CDC’s Board Directors proceeded to unilaterally breach of its oral contract with eight masquerade band CBA members.”

Raguette said that while the CDC has decided to move to its “Plan B”, “No one on CDC’s Board seems to have taken into account that eight masquerade bands have already spent money on and dedicated man-hours to costumes the CDC requested and the contestants themselves selected.”

He said that despite attempts by the CBA “to bridge the chasm that has opened between itself and the CDC we have been told that CDC’s decision in relation to Miss SVG 2014 and the wearing of carnival costumes for the introductory appearance is final”.

Raguette went on to wish the contestants well, and said 13 costume bands will “actively participate in the 2014 Carnival celebrations and will present productions which will advance the glory and splendour of the Vincentian masquerade.

“Finally, we also extend best wishes to the CDC in general and its Beauty Shows Committee in particular for a successful Miss SVG 2014,” Raguette said.