Minibuses so reckless, Transport Minister won’t allow son who wrecked 2 cars in 1 year to ride them 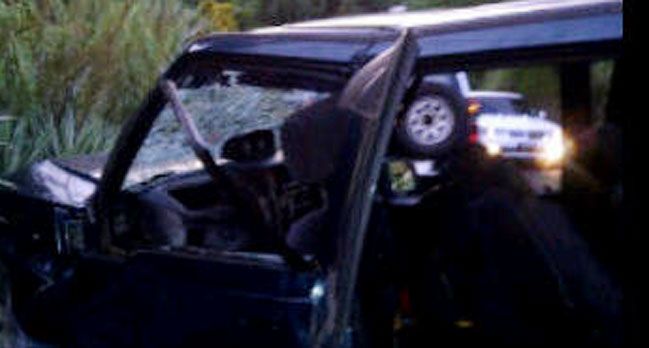 Several students were injured when this vehicle, driven by Julio Francis, son of Transport Minister Julian Francis, crashed in November 2012.

The recklessness among some minibus drivers is such that while Transport Minister Julian Francis’ son wrecked two cars in a year, the senator prefers to buy him another one than have him use public transportation

“The kind of driving I see, comrades, leh we do something about it,” Francis told a meeting of the National Omnibuses Association, Commissioner of Police Michael Charles, and head of the Traffic Department, Superintendent of Police Kenneth John on Sunday.

“We all know the vans. They are loaded with our children,” Francis said.

“My son mash up two cars in one year, but I prefer to buy him another car than put him on the minibus, because, at least he survived the two accidents he had.

“But I would feel very guilty that I put my son … on a van between Kingstown and the Community College, it gets into an accident and he dies. I would feel guilty, because I know I made the wrong decision to put him on that bus,” Francis said.

A number of college students were injured in a Suzuki Escudo driven by Francis’ son, Julio Francis, when it crashed at Villa on Nov. 9, 2012.

The newspaper said it had confirmed that six males and two females, one of whom was not a student, were in the vehicle.

Four persons were seated in the back seat and two in the trunk, while the driver and the eighth person were in the front seats, the newspaper reported.

Five of the persons in the vehicle spent at least three days in hospital, including Marley Young, who underwent surgery for a ruptured spleen.

Another occupant, Ethan Clarke, broke his hip and leg and had a tooth knocked out.

A dislocated shoulder and fractured leg, fractured jawbone were among some of the other injuries that occupants of the vehicle suffered.

Sen. Francis told Sunday’s meeting that that while he was attending as Minister of Transport, he is also a user of the road, and urged “some discipline and order in our driving.

“You have a bad name out there. Leh we accept it,” he further said, adding that only on Sunday, when minivans are not on the roads that other drivers can drive peacefully.

11 replies on “Minibuses so reckless, Transport Minister won’t allow son who wrecked 2 cars in 1 year to ride them”