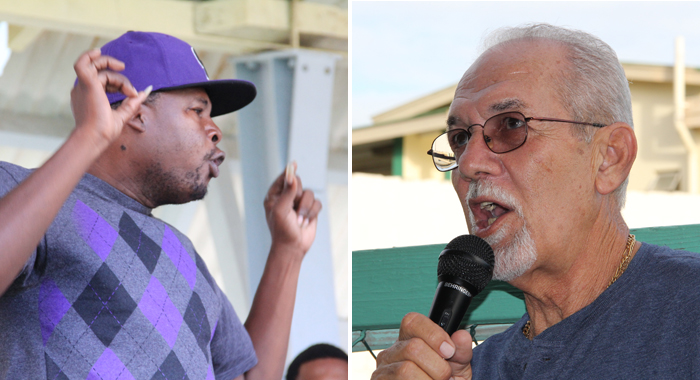 A minibus operator at the recent meeting of government officials and the National Omnibuses Association (NOBA) accused Minister of Transport Sen. Julian Francis of giving “fat talks” rather than addressing their concerns.

“And what I am talking is facts. We work every day, if we only cut down on the fuel, is because we not making any money. Wha’ I want is solution and not fat talks. And [that] is what I getting here — fat talks,” he further said during the question and answer session of the meeting.

“If everybody here believes this evening that what I came here to give you ole talk and sweet talk, doh ha’ no more discussion with me,” the minister retorted.

Francis’ response came after the man made his second intervention at the meeting, suggesting that fishers receive concession because their ranks include well-placed persons of a particular race and higher social class.

The meeting, which included Commissioner of Police Michael Charles and Head of the Traffic Branch, Superintendent of Police, Kenneth John was called to discuss concessions on tyres and fuel, an express route out of Kingstown, and, among other issues, bus stops out of Kingstown.

The operator, in his first intervention at the meeting, questioned the minister’s use of the number of minibuses in operation in 2004 (1,200), which is 700 more than the 500 that NOBA head Anthony “Code Red” Bacchus said are currently in operation.

“So, my point [is], if you say Code Red guessing, you guessing also,” the man told the minister, noting that the figure could have increased or decreased.

Francis, however, said he was not arguing over the two figures since they could easily be verified with the Traffic Department.

Francis had earlier urged the bus operators to strengthen their association, noting that farmers and fishers received concessions on vehicles and engines because they are organised.

But the bus operator said that the Minister’s speech “just sound nice,” adding that he knows a lot of fishermen “doing so much thing and [are] not registered”.

The operator further accused the minister of exploiting the lack of unity among minibus operators.

“What I know is that you see the weak spot and you know the unity is not here, and that is what you stressing on whole time.

“… they say [that] what fisheries have over us is the kind of people who [are] fishing. … And I am not a racist, but is they colour. Check out who fishing. …    is certain people fishing, that is the reason why they having so much concession,” the dark-skinned man said.

“You see, we [are] just down-to-earth fellas. That is the whole reason why we getting pressure; because the unity is not here.

“And I ain’t blaming you, Minister. It is because of us. If we did have different fellas running minivan, in terms of names, I don’t want to say no name neither, we would have the say.”

The operator further said that while the number of minibus operators outnumber the number of fishers, “is just few heads bigger than us, and we don’t have the few heads that fishers have”.

But the operator returned to asked another question and Francis suggested that he gives an opportunity to someone who had not asked a question as yet.

“If you don’t like my question, fine you know,” the operator retorted.

“Comrade, you want a confrontation with me?” Francis asked, to which the operator responded, “No, no, no.”

“Well let us just settle down, nuh,” the minister said.

The operator returned to the microphone sometime later and noted that the minister had pointed out the amount of money spent to decorate vans, even as minibus operators complain that they are losing money because of the price of fuel.

“If you notice right now, it is a trend. The police are saying there are a lot of vans on the road which are not paying them insurance,” the minibus operator said.

Superintendent of Police John had told the meeting that two of three vans in a recent smash-up in which a dozen persons were injured, were uninsured.

But the operator said that “in 2004, at least 2000, we didn’t have that crisis, ”adding that the price of fuel tyres, and parts were cheaper”.

Francis interrupted him, saying, “Well comrade, that is the second time — Leh me say something, because you wah talk whole evening. Watch me. I am here to facilitate something; I didn’t come here for an argument with you. Ah ask you if you want confrontation with me. Me and you go go out there and argue it. I am not here to have a confrontation with you.

“Let me be firm with you on this matter. Okay? I am not here to have a confrontation with you, I did not subject myself to come and have a confrontation with you. So let me settle this matter once and for all. If you know you are not making money in a minivan, I advise you to get [out]. If you can’t make money to pay your insurance, get out of the business. That’s all the advice I have for you,” the minister said as the operator attempted to interrupt.

Another driver began to make an intervention, suggesting that the minister had recognised and were exploiting the flaw in the proposals that NOBA has made.

NOBA head Bacchus asked to be allowed to say something, then Francis asked for a minute, saying,   “Leh me just wrap up this,” telling the meeting that if they believe he came to give sweet talk, don’t have any discussions with him.

“I have tried since 2003 to organise this association. If you all don’t want what I am offering go to somebody else. If you are not happy about the way I am talking to you about it, being frank and open, and down to earth, go to somebody else who would give you the fluff talk he talking about.

“I am not subjecting myself to this. I am being honest and straight with you all. So, if all of you think like him, then forget about me. Okay? Good? Thanks,” Francis said as some crosstalk erupted among bus operators and conductors at the meeting.

“I came down here to encourage — I not answering any more questions. You all will deal with that internally,” he said as someone indicated that they had a question.

“I came down here this afternoon to try and facilitate you all. I am the Minister of Transport for the time being. I told you all I have limited time left, take it serious. I have limited time left,” he said, repeating his suggesting that he would be relinquishing his ministerial post soon to do party work ahead of the next general elections, constitutionally due in 2015.

“A transition between one minister to another to get hot subject back on the agenda could take as much as a year. So, if you are starting a discussion with me, try finish it before I move out  as Minister of Transport. And I am prepared to put a lot into it.”

Francis said he has suggested to Bacchus to get a few persons from his organisation, adding that the police will commit two persons, his ministry assign two persons, and he will attend meeting as required.

“All right? That’s my offer. So, leh we not fight over it, I ain’t come down here to have a fight with nobody this evening. Alright? Cool,” Francis said.