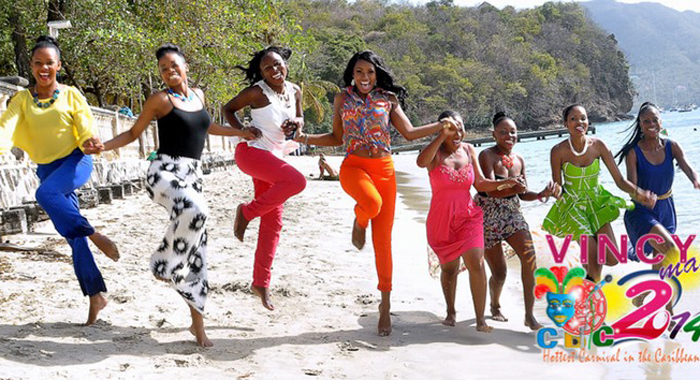 The eight contestants in the Miss SVG 2014 pageant. (CDC photo)

Patrons have been promised “energetic, exciting and entertaining performances from all contestants” in the Miss SVG 2014 pageant, which takes places 8 p.m. today at Victoria Park.

The pageant is the first major show of Vincy Mas 2014, and will see eight women are vying for the title.

The winner will receive a university scholarship valued EC$80,000, tenable at the University of the West Indies, in addition to EC$8,000 from the Carnival Development Corporation, a laptop community from Courts St. (Vincent) Ltd. and gifts from local and foreign business.

The contestants will make five appearances, including the Introductory Appearance, which will not be judged. The four judged appearances will be Swimsuit, Talent, Evening Gown, and Interview.

“This year, we are ensuring that contestants do not change the talents that were presented to us on March 20, the date on which the final selections were made,” Cheryl Rodriguez, chair of the CDC’s Beauty Shows Committee, told a press conference this week.

“There will also be backstage pre-judging of the gowns on hangers to look for neatness and finish on the night of the show,” Rodriguez further said.

She said the committee had requested on April 26 sketches and copies of the gowns to ensure that styles, fabric and colours of gowns are not changed without their knowledge.

“The introductory appearance promises to be sensational, the swimsuits are out of this world, the talents are varies and creative, the evening gowns are breath-taking, and I can say with confidence that I expect the interviews to be brilliant.”

The show will be hosted by Miss SVG 2002 La Ferne Fraser and journalist Jamisha Wright.

Rodney Small and the Ultimate Band are the featured acts.

Rodriguez said that organisers have timed the show to finish at 1 a.m. but will aim for an earlier finish

“Patrons are paying their money to see a professionally produced show and we must deliver,” she said.

Meanwhile, Assistant Superintendent of Police Jonathan Nicholls, the Police representative on the CDC, said parking and vehicular burglary are the main concern of police for the Miss SVG pageants.

He promised police vigilance in an outside Victoria Park

“I want to assure the CDC and the Vincentian public that will be coming out to the show, this year we will be stepping up our game again. You can be assured that there will be increased police presence.”

He, however, urged persons to take steps to protect themselves and their property.

He further reminded persons of the no glass bottle policy, saying it has been very effective, and urged vendors to cooperate.

Nicholls said not only should drinks not be sold in glass bottles, but the bottles should also not be exposed and accessible to persons who might want to use them as missile.

Nicholls further said persons travel around the Caribbean to make illegal gains during carnivals, and urged persons to be careful in securing their personal effects, such as jewellery and cash.

He further told visitors that police are also looking out for their safety, but also urged them to be careful, ensure that they know their whereabouts and avoid areas where they might become victims of crime.