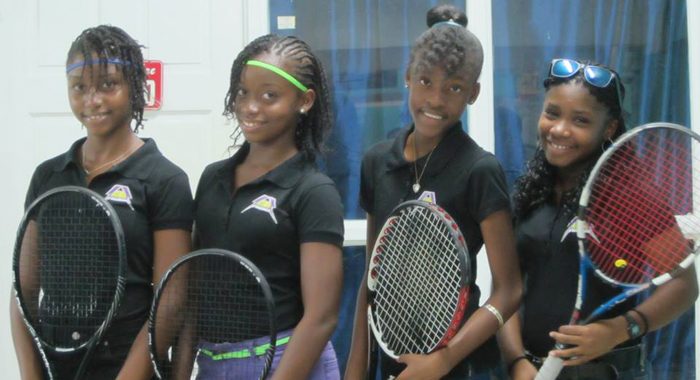 From left: Gabrielle and Amarlia Benn, and Alexi Humphrey and Anastacia White.

This year has so far been a very fruitful one for two young Vincentian tennis players, Gabrielle and Amarlia Benn.

The girls, 13-year-old twins, did themselves and St. Vincent and the Grenadines proud having dominated an all-girls singles and doubles finals at the just concluded Barbados ITF junior tournament.

All of the athletes in the finals were Vincentians.

They further went on to Trinidad, where Humphrey won the girls finals, and the doubles finals, alongside White.

Their outstanding performances in those tournaments has resulted in all four athletes ranking within the top 20 of the Central American & Caribbean Tennis Confederation (COTECC) Rankings with 3 of them in the top 10.

The athletes’ parents are hoping to take the athletes to the Bahamas and Jamaica at the next high-level tennis tournament in July.

This year’s winning streak follows on similar creditable performance over the years, that have seen them winning or being runners-up in their respective categories.

St. Lucia ITF 2013, however, was their first regional tennis outing.

All four girls reached the main draw, and the Benns won the girls doubles finals, a feat that they repeated in SVG in last August.