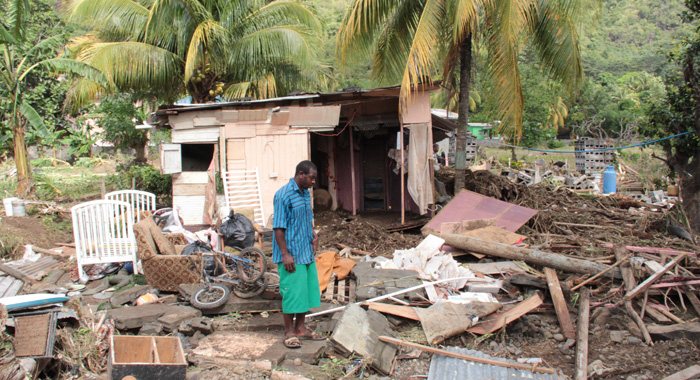 Some 117 persons displaced by the December 2013 flash floods and landslides remained in emergency shelters as of Friday, Prime Minister Ralph Gonsalves said as he noted the impact of climate change on the country.

Initially, the damage from the low-level trough system that triggered landslides and flash floods across St. Vincent resulted in 300 persons being placed in emergency shelters.

“… but bit by bit, we will have all of them out of the shelters, because we are building the homes and we are repairing their homes,” Gonsalves said at an event in Langley Park where keys to seven new houses were handed over to persons who were relocated.

Gonsalves told resident of the north-eastern community and radio audiences that because of climate change, “the weather has become hugely unpredictable.”

He pointed out that St. Vincent was affected by Hurricane Tomas in 2010, and a flash flood “of near biblical proportions” in April 2011 – during the heart of the dry season.

“But in the first five months of this year, when you will normally expect to get around 45 inches of rain, we have had under 20 inches. We have had a drought,” he said.

He, however, pointed out that because of the way the water system is organised, though there are challenges and shortages in some areas, authorities have been able to hold the supply together.

Loss and damage has been estimated at EC$330 million, 17 per cent of the nation’s gross domestic product.

The government had set June 2014 for the exit from emergency shelters for all persons displaced by the extreme weather on Christmas Eve.