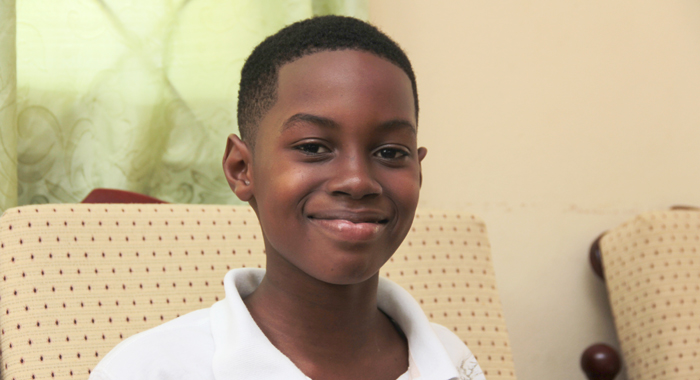 When Rodika Jones received a call from her mother’s cellphone number on Friday she was naturally expecting that the person on the other end would be her mother.

“They were like, ‘Rodika, I am calling on behalf of mom, because she is in an emotional state right now.’ Automatically, my heart dropped, because I didn’t know what she was calling for,” Jones told I-Witness News on Saturday.

“And I heard ‘emotional state’, so I though something was wrong. And then she said, ‘Your brother…” I was like ‘Oh lord, what happened now?’” Rodika further said, recounting the conversation from one day before.

It was then Rodika’s turn to pass on the message to her brother, SVG’s top performer in the Caribbean Primary Exit Assessment, 10-year-old Laron Jones, who scored 95.40 per cent.

“I was laughing actually because I thought it was a joke she was playing on me,” Laron told I-Witness News, recounting his response after receiving the call from the elder of his two sisters.

His mother, La Fleur Jones, a teacher at Questelles Government School, which Laron attends, and his father, lawyer Roderick Jones, later called and told him he was indeed the top performer.

He told I-Witness News on Saturday that he was “very surprised”, that he was the top performer in the exam.

“I expected to do well, but I never had in my head that well to become the top student,” said the Twenty Hill resident, who turns 11 on Sept. 11.

“I have a very committed math teacher, Mr. Winsbert Williams,” he said.

Laron added that this mother, who recently completed a degree in maths, and his father, also helped him to prepare for the exam.

Laron’s life is a mixture of academics and hobbies, including going to the beach and swimming and music — playing music, listening to music, and singing.

“I have one in my room and I just fiddled around with it,” he said.

Laron has entered several competitions, and has demonstrated great determination to succeed.

Laron’s father, before becoming a lawyer about two years ago, was a teacher for more than a decade, and his mother is still an educator.

But does the young Jones want to become a teacher?

“Definitely not,” he told I-Witness News, adding, “Children seem stressful these days and they might get worse.”

“From my view, and looking at my father, I actually enjoy law. And he teaches me a couple things and I think I really like it; so I want to study it,” he said.