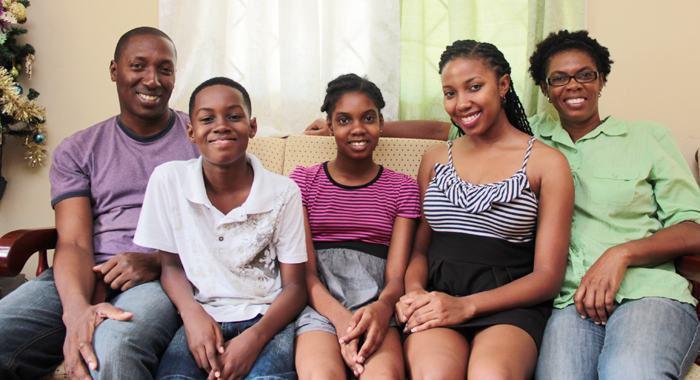 The parents of SVG’s top performer in this year’s Caribbean Primary Exit Assessments say home environment and parental involvement are important for a child’s success, but that the exam puts children under too much stress.

Ten-year-old Laron Jones of Twenty Hill, a student at Questelles Government School, is SVG’s top performer in the CPEA, having attained 95.40 per cent.

“I think more than anything else, the success of a child depends on several factors, one of which is to ensure that you provide the correct environment,” Laron’s father, Roderick Jones, a lawyer and former teacher told I-Witness News at their home in Twenty Hill on Saturday.

He said there are many books in their house and finding space to put them is a challenge.

“Once those were around, it was never pressure on us to try to get them interested in reading. There was never a deliberate effort to teach Laron [to read],” Mr. Jones said of the youngest of his three children.

He said that La Rika, the younger of Laron’s sisters, who is a year-plus older than Laron, naturally learnt to read before him.

“And that motivated him to force himself to learn to read.

“So, it really never required a lot of effort from us to get either of them interested in school,” Mr. Jones further said.

Laron’s mother, La Fleur Jones, is a Grade 3 teacher at QGS, who recently completed a degree in maths.

She said that Mr. Jones, a former English language teacher, helped Laron with languages, while she assisted with maths, science, and other areas.

“We paid a very pivotal role in their educational development,” Mrs. Jones said of their three children, the oldest of which, Rodika, is reading for a bachelor’s degree, while the second, is a student at Girls High School.

“People don’t realize that the school cannot do everything,” Mrs Jones said, noting that there were 38 students in Laron’s class.

“So, as parents, we look at the areas that the teachers concentrate on less, and we push that.”

“So, naturally, once you have those in your life, it is easy to try to get to where they are in their lives or to surpass them.”

Mr. Jones further told I-Witness News that Laron, who has competed in several reading and literacy competitions, “has always been the consummate competitor and I think that has motivated him to give of his best.”

But, he noted that like every other child, there were times when Laron didn’t feel like doing any work.

That is when parents have to remind their children that exams are still ahead, although the exam may put them under some pressure.

“It is something I think we have to try to teach children at an early age. It can’t always be about playing. Of course, you have to play because you are a child. But even at that young age, you have to develop the discipline that when you have things to do, you have to get them done.”

Mrs. Jones said that Laron used to prepare and answer 50 questions every evening after school and his parents would correct them.

But in the last week before the exam, she allowed him some freedom.

“The last week, he said, ‘Mommy, that CPEA burn me out. That first part took all my energy. So the last week, in all honesty, I allowed him to go on his iPad every evening.”

But the parents also said they think the CPEA puts children under even more stress than the Common Entrance Examination (CEE), which it has replaced.

Some educators and parents have criticised the CEE as a one-shot, do-or-die exam that had a significant impact on a person’s life chances, and put them under too much stress during one day of exams.

Mrs. Jones told I-Witness News that she thinks that the CPEA is even more stressful. And while she said that with the CPEA students will go into secondary more prepared, the system is designed to scoop off the cream.

“Regardless to how you look at it, the education system is a sifting period to Form 5. And those who go in with a pass mark, if they can’t make it, the system will sift them out all the same.”

With the CPEA, students have an opportunity to gain 40 per cent of the mark ahead of the final exams, while under the CEE, they begin the day with zero per cent.

“I think 40 per cent is a bit much. I think probably we could go to 25 [per cent], because, after all, you still want to see the child’s performance under pressure on that day,” she said, even as she reiterated that the CPEA puts under “even more pressure” than the CEE, adding that they only have a 15-minute break and 30 minutes for lunch.

“I have my concerns about it,” saying he also thinks that a 40 per cent assessment ahead of the exam is “a bit much.

“I’d prefer to see a 30-70 as opposed to a 40-70. In addition to that, I am bit concerned about the quality of the projects that the children are expected to do. I am not quite sure if that is meant to be done by the parents and teachers or by the children.

“If we going to go through the task of having a project, it should be one that the students are more than able to do with some guidance,” he further said of the school-based assessment.

“I think the nature of the project required too much involvement by teachers and parents. So I would like to see them get something that is a bit more student-friendly, a bit more within the experience of the children so that they can do it with minimum supervision and guidance from their parents and teacher.”

But Mr. Jones said he likes the idea of continuous assessment.

“That, in my opinion, was one of the elements that was woefully lacking from our Common Entrance Exam.

“As much as I like that idea of continuous assessment, I am hoping that over time we are going to fine-tune it so that it is reduced from 40 to 30 [per cent] and it doesn’t involve that much involvement by teachers and parents. They, in my opinion, ought to be supervisors, and provide some guidance along the way, but not be that actively involved in the project itself.

“It had to be, because, the children on their own could not have managed. There has to be some simplification of the projects that the children are doing,” Jones further said.

He further said that he would like to see the exams spaced out a bit more on the final day.

“I really don’t see the need to be putting the children under so much pressure. Just space it out a bit more so that they can have decent breaks between the papers,” he said.