They beat me from Tokyo to the Plant Shop, victim tells court 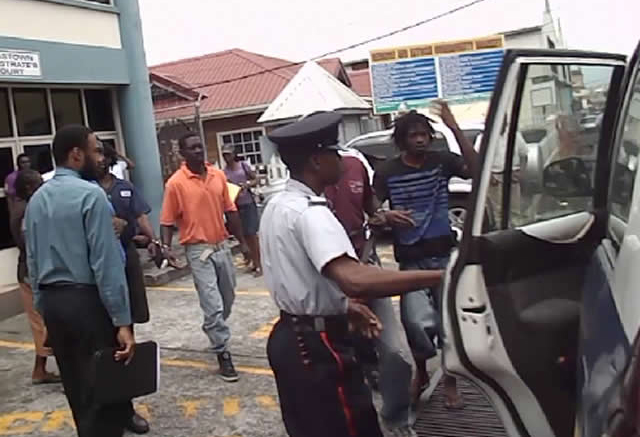 “Mr. [Dunbar], these injuries are quite extensive. The force used was very excessive even if two persons held on to you.”

So said magistrate Rechanne Browne-Matthias as she summed up an unlawful and malicious wounding trial before the Kingstown Magistrate Court on Monday.

The magistrate found Rillan Hill resident Jamarlo “Marlo” Dunbar guilty of unlawfully and maliciously wounding fellow villager Brian “Too Short” McKie — a crime which was committed in capital Kingstown on May 16, 2014.

She sentenced Dunbar to six months in prison.

McKie, in his evidence in chief, told the court he and a friend were at Ginger Bar at Little Tokyo (Bus Terminal) liming when Dunbar and Andrew Harry of Chateaubelair approached. He said an argument arose over an allegation Dunbar made against him and Dunbar started beating him in his head with a bottle while Harry beat him about the body with a piece of board.

“They beat me from (Little) Tokyo to the Plant Shop,” McKie told the court.

McKie said that during the beating over a distance of approximately 200 metres, he sustained injuries to his head, hands and other parts of his body and received 43 stitches. He also said he spent three days in hospital.

Under cross examination from the defendant, McKie said the two young men beat him because he pushed them from in front him as they were assaulting him.

Detective constable Godwin Bowens told the court that about 1 p.m. on May 16, 2014, he received a telephone call from the Milton Cato Memorial Hospital and as a result he went to the male surgical ward where he met McKie. He said he noted that McKie had injuries to his head, face and both arms, and they were sutured.

Bowens also told the court that McKie reported against Dunbar and Harry and he arrested and charged Dunbar on May 23.

In his statement to the police, which was read in court, Dunbar said he knew McKie and they drank from the same cup. He said he had shouted to someone in a passenger van and McKie started arguing with him, asking why he was calling his name. He said an argument ensued, McKie threatened to blow his head off and he struck him with a bottle.

Dunbar did not give evidence but said he wished to stand by his statement to police.

Asked if it was “one blow” he struck McKie with the bottle, Dunbar replied “Yeah, I hit him with a bottle in his head.”

The prosecutor, pointing to a medical report, said that according to the examining doctor, McKie sustained multiple injuries.

Asked if he was angry when, according to him, Mc Kie threatened to blow his head off, Dunbar said yes.

Magistrate Browne-Matthias said the injuries were “very, very serious”. Noting that Dunbar had said in his statement that he and McKie were friends to the extent they drank from the same cup, she said she would not drink from anything with him. She said she wonder what he would have done if they were not drinking from the same cup.

One reply on “They beat me from Tokyo to the Plant Shop, victim tells court”