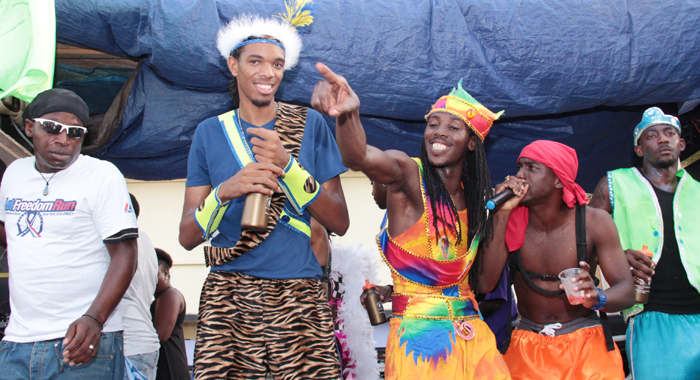 Fireman, centre, and other artiste sing on the road on Tuesday. (IWN photo)

Power and Ragga Soca Monarch Delroy “Fireman” Hooper says he thinks it is unfair for Gamal “Skinny” Fabulous not to indicate the song he will perform during the Soca Monarch competition.

Fireman unseated Skinny during the Power Soca competition on Saturday, and also won the Ragga Soca crown the same night.

For years, the programme that the Carnival Development Corporation produces for the Soca Monarch competition has had the name of the song that others artiste will perform, except Skinny’s.

“For years I have been trying to find out, because a competitor needs to know what rival they are coming to meet, in terms of song,” Fireman told I-Witness News when asked about the issue shortly after his crowning around 4:30 a.m. Sunday.

“I don’t know why he does it; I don’t think it is justice, but that’s what he does; that’s what they (CDC) accept.

“I can’t say anything further on that. But if I have to defend next year, I will have to put my songs. I don’t know about the system and what the system accepts,” Fireman further told I-Witness News.