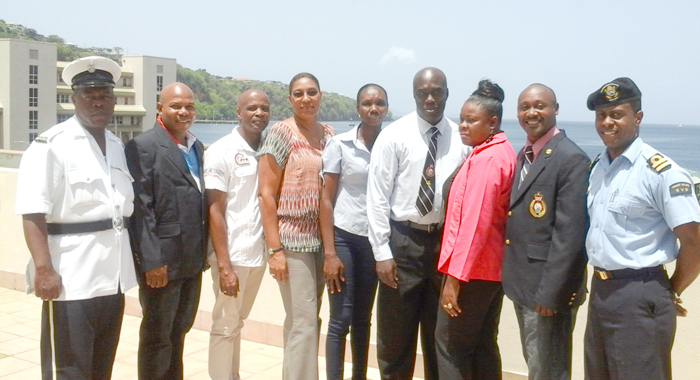 Some of the officers who are celebrating 20 years in the Police Force.

Sixteen members of the Royal St. Vincent and the Grenadines Police Force Course No.13 on Tuesday marked their 20th anniversary since enlisting as members of the local constabulary.

To celebrate the milestone the police officers have been participating in a week of activities, which began last Friday and will conclude on Saturday, with most of it being slated for St. Lucia.

Sergeant Browne, sharing her views on the achievement, said she is elated and plans to continue being a police officer for as long as possible.

“Some people say they’ll do 10 years in the organization and they’re gone. I never held that thought,” she said.

Browne said she always remembers that she is from a poor family and this was one of the driving forces that led her to pursue a career in policing.

she said that during her journey as a police officer, there were times that she faced difficulties, but she never thought of “quitting”. During her tenure she has worked at the Narcotics Division, Beat and Patrol, Immigration and DARE.

Corporal Kirby said it is a great feeling to be celebrating her 20th anniversary as a police officer.

“I have experienced everything. It has been hard work and sacrifice. You don’t always get to achieve what you’ll like, but it’s good so far,” said Kirby, who works at the Major Crime Unit.

She also had the opportunity to work at the Rapid Response Unit, Criminal Investigations Department, Process and several out stations.

“As a child growing up, policing is a career that I always wanted to pursue. Coming from humble beginnings and seeing things that less fortunate go through when they break the law, I always said I wanted to make a difference,” Kirby said.