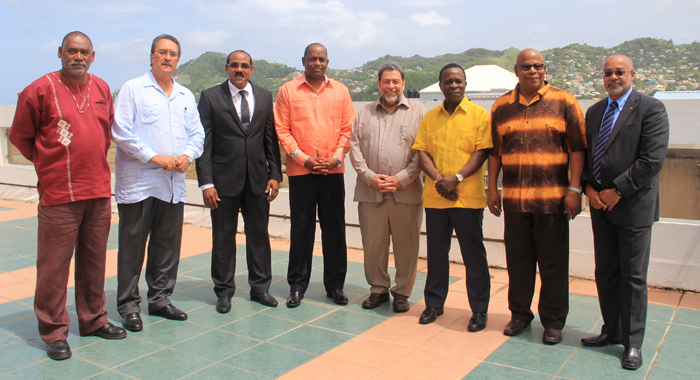 The 59th meeting of the OECS Authority was held in Kingstown on Saturday. (IWN photo)

Two Prime Ministers from the nine-member Organisation of Eastern Caribbean States (OECS) say they support a political union within the bloc, which shares a currency union and other elements of integration.

Outgoing chair of the OECS, Prime Minister of Antigua and Barbuda Gaston Browne, and his Vincentian colleague, Dr. Ralph Gonsalves, expressed their support for even deeper integration as they addressed the opening ceremony of the 59th meeting of the OECS Authority in Kingstown on Saturday.

“I am convinced the OECS Economic Union is absolutely essential to our future economic well being. We are therefore in the middle of fashioning an OECS response to unprecedented economic circumstances,” Browne said.

“These circumstances, if not addressed early and well, can pose an existential threat to our economies,” he further said.

Browne noted that the OECS Economic Union creates a two-tier system of regional governance that allows for certain decisions in key areas to be taken regionally while other decisions remain at the national level.

“There are those who remain suspicious of such an arrangement and who believe that the decisions on matters affecting their lives will be taken by distant bureaucrats without taking in their views into account.

“There are those who believe that the pooling of sovereignty is actually loss of sovereignty and that all of the levers of powers are to be in national hands,” Browne said.

“I stand here today to reject that notion. Instead, I stand here today to celebrate the accomplishments of the OECS to date and to assure you that the establishment of our economic union is perhaps the single most important development in regional integration in the Caribbean throughout the last two decades,” he further said.

Browne reiterated the commitment of his government to the OECS and its Economic Union.

He said the OECS model is able to bring economic benefit to the region and to “unleash the economic potential that has been smothered at present by the small politics and repetitive process of individual sovereignties”.

“I am very happy that he has put on the agenda yet again the issue of the possible union of the OECS, without using that exact formulation, which sometimes scare some people,” he told the ceremony.

“But I would very much like to see us with one central government which is a federal nature,” he further said.

Gonsalves, a lawyer, however said he reasonably suspects that to form a political union, the individual members of the OECS will each have to hold a referendum to alter their constitutions.

“And, as one who has been involved in at least one referenda, even that which is perfectly sensible and right, opposition parties tend to use them to give you a political black eye in the hope that the next election, they can take you out,” Gonsalves said in reference to proposed changes to the St. Vincent and the Grenadines constitution that citizens rejected in 2009.

“But just to say it is an important idea to put back on the agenda,” Gonsalves said.